The horrific images of the massive explosion that rocked Beirut, Lebanon, in August 2020, motivated Kent State University officials to reach out to help.

Their thoughts immediately turned to Lebanese American University (LAU) in Beirut and its School of Architecture and Design, with which Kent State’s College of Architecture and Environmental Design has been cultivating a relationship for the past several years. 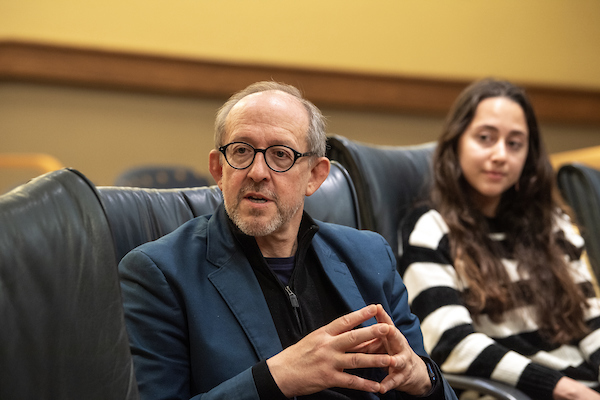 “Over the past three to four years, we’ve had a number of exchanges and collaborations with classes and students. Their students have participated in our Florence program, they hosted a team of Kent State students and faculty in Florence and together we’ve run two joint workshops in New York City,” explained Mark Mistur, AIA, dean of Kent State’s architecture college.

Mistur forged the collaborations through his professional relationship with Elie Haddad, Ph.D., dean of the School of Architecture and Design at LAU. Prior to the pandemic, Mistur,  Kent State President Todd Diacon and Vice President for Global Education Marcello Fantoni visited the Beirut campus to help cement the collaboration.

The August 2020 blast, an explosion of ammonium nitrate in the port of Beirut, caused widespread damage to the city and its infrastructure, killed more than 200 people and injured more than 6,000. Coupled with the global pandemic, the result has been economic collapse and political unrest in the small Middle East nation.

“It’s been difficult for Lebanese colleges to even remain open,” Mistur said. “There are widespread power outages, students and their families have no access to their banks. President Diacon stepped forward with the notion of `How can we help?’ And he provided for six of their students to come to Kent State fully-paid for the 2022 Spring Semester.”

LAU held a competition among its architecture students for the Kent State scholarships and the six who were selected to attend arrived in Kent in January to continue their architecture studies during the spring semester. 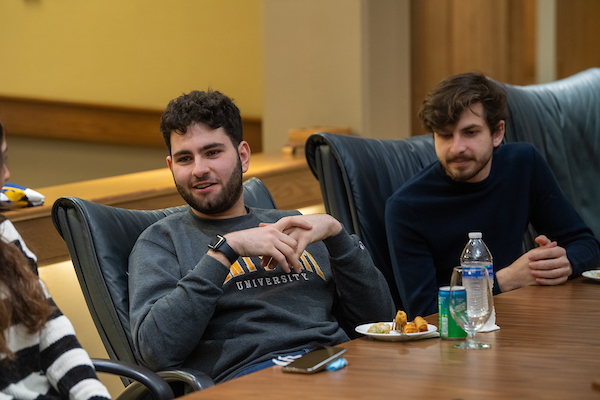 The students – Charles Abi Chahine, Diab Ali, Elie Aoun, Carol El Farraji, Alec Jil Agopian and Andira Khanafer – recently sat down with President Diacon, Mistur, Fantoni and Senior Vice President and Provost Melody Tankersley for a small reception to talk about their experience at Kent State and what the semester has meant to them in terms of completing their studies.

The economic crisis that followed the explosion and the pandemic has made day-to-day living challenging for the city of Beirut and the entire country, they said.

LAU lost faculty due to the disruptions, and courses they need to finish their degrees aren’t always available. There also are problems with basic services, including electrical outages and spotty internet connection.

As fourth-year students, they have spent much of their spring semester at Kent working on their large, integrated design project, in which the students must develop comprehensive designs for a large-scale building, integrating not only its design but also all of its electrical, plumbing, structural and mechanical systems.

President Diacon asked the group how they were managing working in the English system for measuring, instead of the metric system.

The students noted how they were offered the option of working in metrics but chose to work in feet and inches instead for the challenge and experience.

“You have to take the hard way sometimes,” Aoun said, of getting used to the English measurements. 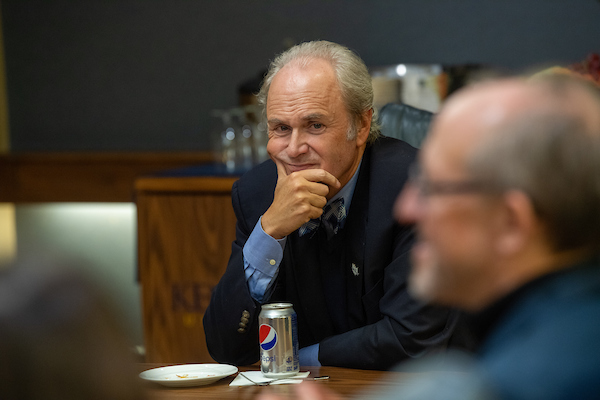 The students are trilingual, fluent in Arabic, English and French, and their courses at LAU are all taught in English.

“Lebanese people are really citizens of the world,” Fantoni said.

LAU’s program is one of just four international architecture programs that are accredited by the National Architectural Accrediting Board (NAAB). Because of that accreditation, their course work will translate seamlessly toward the students’ degrees at LAU, Mistur explained.

Attending an NAAB-accredited program also means the group would be able to work toward licensure in the United States after graduation if they desire, he noted.

The students will return to Lebanon to complete their final year of study, and all of them said they already know that they will have to leave Lebanon to pursue their careers. Several have parents who already are living outside of Lebanon for employment due to the economic upheaval.

“You can’t even get your money out of the banks,” El Farraji said. “It says on the computer that your money is there, but you can’t get it.”

Several mentioned an interest in graduate school at Kent State. All expressed their gratitude for the opportunity to study here as well as the warm welcome and assistance they received from Kent State’s Office of Global Education.

"All the signs that say, ‘You belong here,’ well you really do feel like you belong here,” Khanafer said, noting the many helpful emails the students received to make their transition to Kent State so seamless. 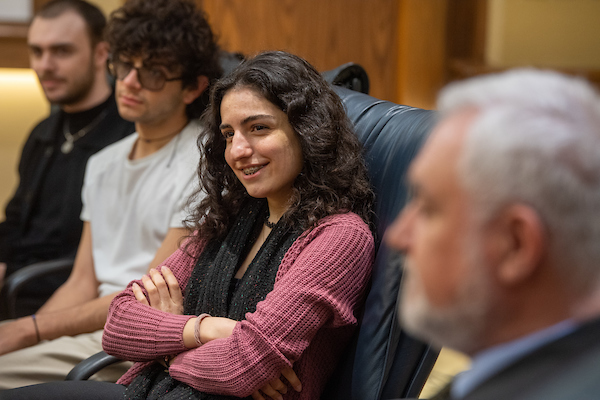 r of study in Beirut for some Kent State students.

“This invitation for six of our students to spend a term at KSU is a testimony to the persistence of goodwill, the human desire for building bridges across cultures and the great values of American higher education,” Haddad said. “We are grateful for this initiative led by President Diacon, Dean Mistur, Provost Tankersley and Vice President Fantoni.”

Mistur said the Lebanese students have done well in their coursework and have been a positive influence on other students in the program.

“They are very engaged, very positive, and it’s something very exciting to see happen,” he said.

Mistur said one of the college’s strategies is to offer Kent State students greater exposure to international programs, “so that our students have a better understanding of the world and become better global citizens.”

Kent State’s partnership with LAU brings a high level of cultural awareness to Kent State students, who may not have international exposure or any experience beyond Europe..

“Lebanon is a cultural crossroads,” Mistur said. “In Beirut, the people are tri-lingual, there is the convergence of many cultures and religions. It’s a wonderful partnership to expose our students to and it brings greater cultural and personal awareness.”