Kent State’s Facilities Planning and Operations department, which is in charge of the university’s sustainability efforts, has implemented two new ideas to make Kent State a more sustainable campus 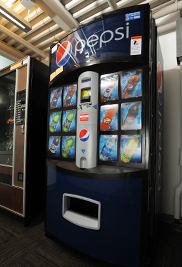 Kent State’s Facilities Planning and Operations department, which is in charge of the university’s sustainability efforts, has implemented two new ideas to make Kent State a more sustainable campus.

New soda machines that save more energy have been placed around campus. Several steps have been taken to conserve energy:

Even though the machines may appear off, they still keep drinks cold. The machines will “wake up” when touched.

Increased recycling efforts
New recycling partitions also have been placed in trash receptacles around campus to encourage the campus community to recycle.

The Facilities Planning and Operations department also is testing new, half-moon-shaped recycling liners in 10 trash cans throughout the Kent Campus.

“The university has been working on providing more recycling locations outdoors on campus,” says Knowles.

Knowles says the department plans to execute a campaign to raise awareness by using signage, such as a ribbon or wrap around the divided cans, so people know from a distance that the cans are for both recycling and trash.

If successful, Knowles says the recycling liners will likely be added to all trash receptacles on campus.

“The liners are a convenient way for students, staff and faculty to recycle,” Knowles says. “Kent State is dedicated to sustainability and staying green, and the liners are only one of our ideas.”

For information or feedback regarding Kent State’s sustainability efforts, visit www.kent.edu/sustainability or contact Knowles atmknowle1@kent.edu or 330-672-8039.