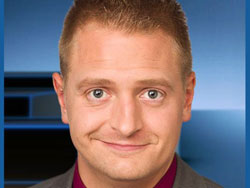 WKYC TV reporter Will Ujek discovered the difference between watching football and kicking the winning field goal, as he transformed from a fan to a player for the day.

As part of his quest to learn a new talent, Ujek reached out to April Goss, one of Kent State University’s Golden Flashes Kickers.

Goss joined the team in 2012 and had plenty of advice for Ujek. Ujek gets a few bumps and bruises before his moment of triumph.