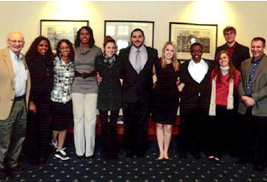 For the past 14 years, Kent State’s Department of Political Science and the College of Arts and Sciences joined together to send one team to the American Mock Trial Association competition.  During the competition, the teams must act out a court case. This year’s case was an accidental death during a scuba diving expedition. The Kent State students developed defense and prosecution teams. Some team members took the roles of attorneys, and others played key character witness roles.

Although several of the students had competed in mock court competition in high school, none of the team members competed before at the higher education mock trial level. Kent State competed against strong teams from schools such as, Carnegie-Mellon, Cornell University, Michigan State and the University of Michigan.

Kent State’s mock trial team is open to students in all majors. Currently, the coaches prepare the students for competition through classroom instruction and training sessions during the fall semester, and in the spring semester, the students compete against other universities. The students enroll in Political Science 40993: Workshop in Trial Practicum for the spring semester. Both coaches are hoping that the number of participants will increase next year so that two teams can be created

The coaches say that if the course were offered during the fall semester, it would give the team more time to learn the procedures and rules and to practice mock court cases.

“That would allow us to do scrimmages, known as flights,” says Kratcoski Jr. “Right now we can’t start recruiting until late September or early October.”

Kratcoski Jr. also says that many of the other schools attend “flights” throughout the fall semester to better prepare themselves for the American Mock Trial Association competition.

“With more time and funding, our Kent State team can gain more experience to compete in future competitions,” says Kratcoski, Jr. "We are seeking funding sources for future tournaments.”