Live Chat
Kent State University alumna Pat Gless reflects on May 4, 1970, near what was then the ambulance bay of the old Ravenna hospital.

Pat Gless to share her story during an Oct. 2 panel discussion titled “PTSD: From May 4th Through Present Day”

In the spring of 1970, two-time Kent State University alumna and registered nurse Pat Gless was a junior in Kent State’s inaugural nursing program. While in class on Monday, May 4, a professor rushed into her classroom and warned students who could leave campus to do so. 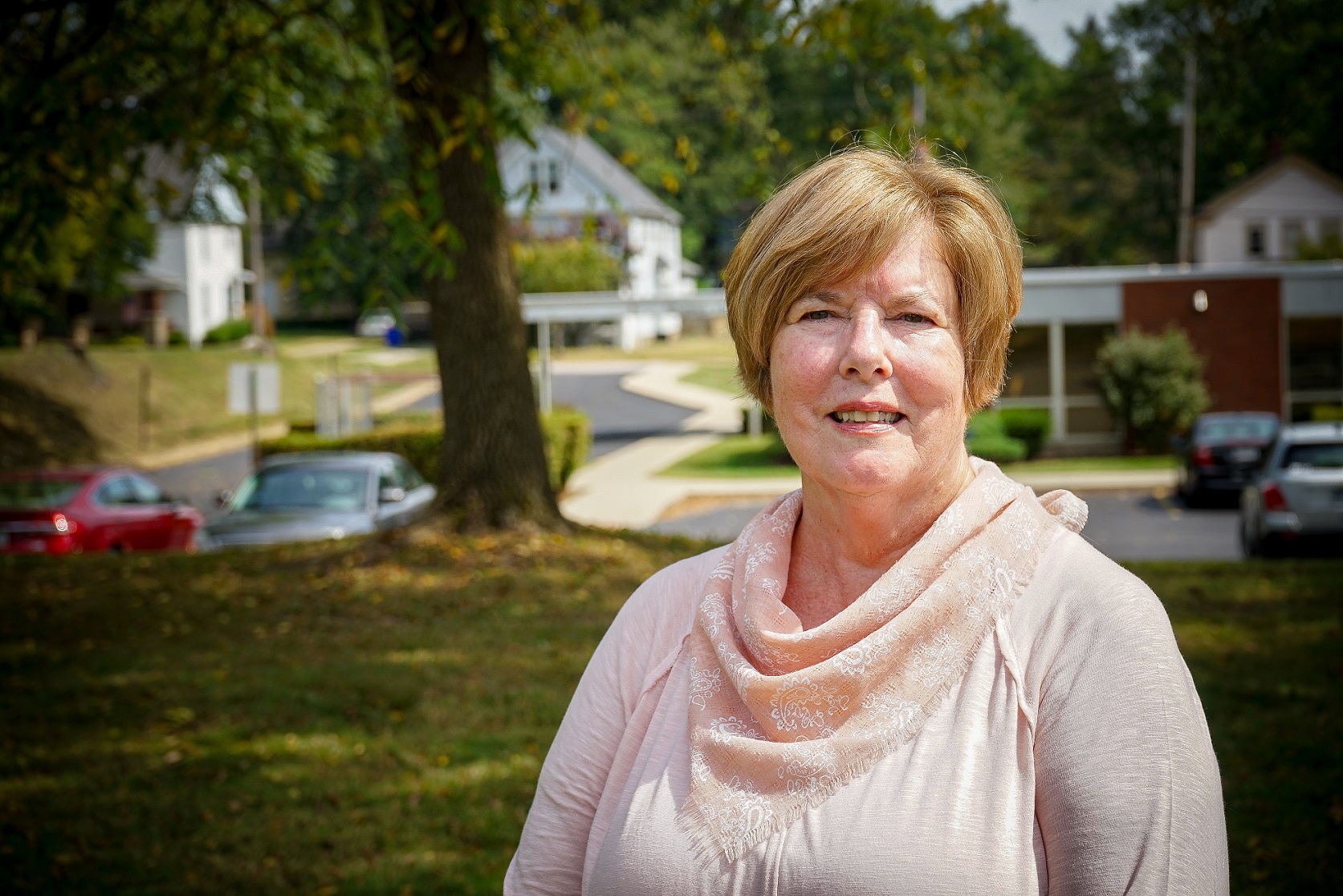 “Campus felt very somber, like someone was invading our space,” remembered Gless, who received her Bachelor of Science in Nursing in 1971 and her Master of Science in Nursing in 1993 from Kent State. “We weren’t sure what was going to happen; we were living in a time of unknown. It was frightening to see the National Guard soldiers on campus. Their vehicles were everywhere, and I really wanted to leave.”

A commuter student, Gless returned to her home in nearby Ravenna, Ohio, where she later learned about the campus shootings from the radio. Fifty years later, Gless now reflects on the events surrounding that tragedy and how they have impacted her life and nursing career.

Her home sat beside the old Ravenna hospital, where she also worked. Looking out the back window, she saw the emergency room parking lot overflow with people. Not long after, she was called into work.

Assigned to the intensive care unit as a nurse tech, Gless was tasked with assisting the nurses in providing care for some of the May 4 injured.

“It was like I was suspended in time; it was very strange and hard to process,” she said. “Our purpose was to provide care to the patients, and that’s what I forced my mind to concentrate on because everything else was overwhelming.”

In the months leading up to May 4, Gless recalled that many students would march from downtown Kent to the campus to protest the Vietnam War.

“My brother, cousins, an uncle and a few friends from high school were serving in Vietnam,” she said. “I had a vested interest in wanting to get them all home.”

Remembering back, Gless explained the complex mixture of people on campus.

“There were students who had served in Vietnam and who were now attending Kent State,” Gless said. “Some of the National Guardsmen were also students. It was such a complicated mixture of people who were all about the same age. People had strong opinions.”

The marches and protests occurred during a time when students were expected to be obedient.

“I don’t think many adults were used to young people talking against the government or showing their disapproval by marching together,” she said. “Following May 4th, it was the only thing people talked about wherever you went, even outside the city. If you were traveling and you mentioned you were from Kent, people knew right away about the conflict on campus and asked about it. It took a long time for things to settle down.”

The university closed down immediately following the shootings. With only a few weeks remaining in the quarter, Gless remembers wondering if she would have to transfer somewhere else to graduate on time.

“Our instructors sent us our assignments in the mail,” she said. “We would complete the work and send it back. It was strictly book work and papers, and that’s how we completed our quarter.”

The university resumed classes beginning in the summer quarter.

Gless believes one of the factors that contributed to the May 4 shootings was a breakdown of communication, and she has made that a focus in both her life and nursing career.

“My experiences have helped to sharpen my communication skills,” Gless said. “I listen more. I asked myself how I could help make things better in the world, and the answer was to listen and find out what people need.”

It was Gless’ mother who inspired her to become a nurse.

“She was such a good role model for me,” she remembered fondly. “My mom was a nursing supervisor, and I thought that was something I could do as well.”

A nurse for 40 years before retirement, Gless has experience working in medical surgery, the intensive care unit, the step-down unit and pre-admission testing. She later went on to become an instructor at Malone College of Nursing and work in the simulation lab at the University of Akron School of Nursing before returning to the bedside for the last decade of her career.

“Kent State provided me with a good, solid education to go out into the world and do all the different things I’ve done,” she said. “Part of my heart is always at Kent State. All my family members have gone here, and my grandson is a current student majoring in computer science.”

Many of Gless’ family members share her interest in the time around May 4, and they often join her when she comes to campus for memorial events.

“I truly appreciate their involvement in the history and how it’s become important to them,” she said. “While in high school, my grandson was a member of a student organization that served Vietnam veterans and raised funds to build a library in Vietnam for children. Three generations later, our family is still reflecting on that time and trying to make the world better. It makes me so proud because a lot of people were affected back then.”

Gless hopes current Kent State students take the time to examine the May 4 shootings and learn from the history.

“Use this new knowledge to actively listen to others’ opinions and be respectful of different generations,” she said. “We all come from a unique perspective, but we need to try to exist in a respectful and accepting world with those around us.”

On Wednesday, Oct. 2, Gless will share her story as part of a panel discussion titled “PTSD: From May 4 Through Present Day” alongside Claudia Cihlar, Ph.D., APRN-BC, CNS; Doug Delahanty, Ph.D.; and Sarah Ostrowski-Delahanty, Ph.D., during the Kent State College of Nursing’s May 4 Commemoration event moderated by Wendy Umberger, Ph.D., associate dean of Kent State’s College of Nursing. The panel discussion is at 7 p.m. in the Kent Student Center Kiva and takes place following a 5:30 p.m. walking tour of the May 4 site led by Alan Canfora, who is one of the nine Kent State students shot and wounded on May 4. Both events are free and open to the public. Please click here to RSVP.

Photo Caption:
Kent State University alumna Pat Gless reflects on May 4, 1970, when she was a junior nursing major and how she assisted the nurses at the old Ravenna hospital in providing care for some of the injured.