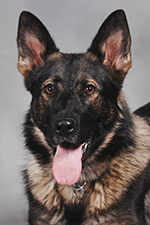 Coco is trained in evidence search and recovery, area searches and tracking, but is mainly trained for explosives detection and can recognize more than a dozen related odors.

“The relationship between Coco and me is very fine-tuned and is a big learning process, especially for new handlers like me who have never handled a working dog before,” Spahr says. “There’s a lot of training involved, so she’ll be trained every month. I’ll continue to train with her on-shift and make sure she’s kept fresh and interested in working.”

Spahr says the department talked to other K-9 unit handlers about purchasing and training a dog and chose to go to Von Der Haus Gill K-9 Academy in Wapakoneta, Ohio. The facility matched her with Coco from Germany and did all of the training on-site.

“It’s kind of like Match.com for dogs and people,” says Spahr. “I just told them what we were looking for.”

Besides Coco, there is only one other K-9 unit in Portage County trained for explosives detection. This influenced Kent State’s Police Services’ decision to obtain a police dog.

“If Kent State receives a bomb threat, we are better able to respond to the threat in a shorter amount of time and with more resources,” says John Peach, Kent State’s director of public safety and chief of police. “By having a certified K-9 within the department, it automatically enables the police department to have mutual aid with all other police departments that have K-9s, and possibly lend the unit out to other departments in urgent need of a K-9 tracker or bomb dog.”

Spahr says she has learned the importance of trusting Coco.

“When dogs are trying to tell you something, they are pretty much always right,” says Spahr. “During training exercises, when we would run tracks for Coco to track people, I might have had it in my head that the person went one way. And then I kind of pulled her off the track and tried to lead her, so that’s a mistake I made a couple times.”

Coco is a sweet dog who loves attention, and she can be petted if people ask for permission. The only time she can't be touched is if she is performing a specific duty of her job, says Spahr.

“With only the little bit of time that Coco has been working on campus, it is very clear that she is a big hit with students and staff, alike,” says Peach.