Kent State University’s Institute for Applied Linguistics, in collaboration with the Department of Modern and Classical Language Studies and the Department of History, will host a Spanish Film Series from Feb. 28 – March 15. 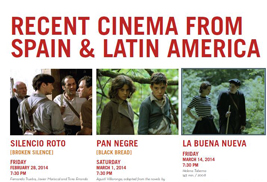 Kent State University’s Institute for Applied Linguistics, in collaboration with the Department of Modern and Classical Language Studies and the Department of History, will host a Spanish Film Series from Feb. 28 – March 15. This series will feature five films in the Schwartz Center Auditorium, and is free and open to the public.

“It’s an opportunity to experience another language and another culture without leaving Kent,” says Françoise Massardier-Kenney, director of the Institute for Applied Linguistics.

The movies are all subtitled in English, and volunteers will give a short presentation before each film viewing and lead a discussion after. The Spanish Film Series was made possible with the support of the U.S.A. Spain Foundation, Embassy of Spain.

During the winter of 1944, 21-year-old Lucía returns to the village where she grew up. She meets the handsome Manuel, a young blacksmith who supports the guerrillas hiding in the mountains as they continue to fight against the Franco regime. When Manuel is forced to go underground, Lucía discovers not only the harsh living conditions of the guerrillas but also the silence, terror and fear that hang over the village. Only her love for Manuel allows her to keep hope alive. “An accomplished, rangy and affecting piece from a helmer whose best work has its roots in the rural landscapes of his native Navarre” --Variety Magazine.

In the harsh years after the Spanish Civil War, Andreu, a child who belongs to the defeated, finds the corpses of a man and his son in the Catalán forest. The authorities want his father to be held responsible for the deaths, but Andreu tries to help his father by finding the identity of the true killers. The film won nine Goya awards (the Spanish version of the Oscars), a rare occurrence.

A young priest arrives on his first assignment to a small parish serving a working-class village in the north of Spain in 1936. He is a witness to the military uprising that precipitates the Spanish Civil War and, moved by his faith, he stands up to defend his people. Based on a true story, the film portrays the young priest’s commitment to stand by his parishioners and follows him as he appears before the leaders of the Roman Catholic Church and denounces the crimes being committed on behalf of the Gospel. This film was winner of the Nantes Spanish Film Festival.

This film won the Goya prize for Best First Film Director. A young woman returns to her family in Spain but encounters severe dysfunction and fracture, in this ensemble drama. Nausicaa Bonin stars as co-ed Lea, whose paternal grandfather dies, prompting her to return from Bordeaux, France, to her childhood home in Catalonia for the funeral. Lea’s parents are separated, but pretend they are not for the sake of appearances. Meanwhile, although Lea’s two brothers, Pere (Ramon Fontsere) and Toni (Francesc Orella) come to the funeral, her sister Virginia (Amalia Sancho) fails to appear. She has just written an autobiographical novel that unearths many of the family’s skeletons, to the dismay of some of her relatives.

In 1988, under international pressure to legitimize his government, Chilean dictator Gen. Augusto Pinochet allowed a referendum on whether he would be voted in for another eight years in office. This movie dramatises the “No” campaign devised by young advertising executive René Saavedra, played by Gael García Bernal, who decided to refrain from angry political images and instead emphasized an upbeat, almost apolitical vision of happiness. “The best movie ever made about Chilean plebiscites, No thoroughly deserved its Oscar nomination for Best Foreign Film” –The New Yorker. This film was a New York Times critics pick.