Thomas Janson was recently recognized along with five other faculty scholars, as an Outstanding Research and Scholar Award recipient. 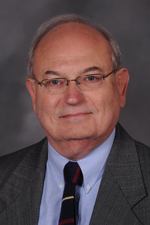 Thomas Janson has been a Hugh A. Glauser School of Music faculty member since 1980, chair of the Faculty Senate from 2008 to 2010, and a College of the Arts senator for 10 years.

He was recently recognized along with five other faculty scholars, as an Outstanding Research and Scholar Award recipient.

Denise Seachrist, director of the School of Music, underscores how praise-worthy Janson’s work is.

“The recognition Dr. Thomas Janson has received with this honor is well-deserved, and all of us in the School of Music are very proud of his accomplishments,” Seachrist says. “In addition to being a highly regarded composer, Tom is well-respected as a caring and highly effective educator. He has served as assistant to the director for five School of Music directors, and the institutional memory he holds is invaluable.”

Janson comments on his reaction to receiving the award.

“There is nothing quite like the dual life of an academic and a performer in the creative arts. At Kent State University, such joy is possible. Being a composer of concert music, as well as a performer, my musical career has taken me to the heights of passion with performances in many glorious venues,” he says.

Janson recounted a performance of his music in Kent and Cleveland with the Kent State Choirs and Orchestra rehearsing for three months to prepare. Called “Visions of the Omega,” it was commissioned by Kent State to celebrate the university’s Centennial in 2010. A copy of the musical score, the concert program and a CD recording were buried under Risman Plaza in a time capsule last year.

“To be recognized and appreciated at home is the best compliment a composer can receive,” Janson says. “The award truly acknowledges the importance of the arts on our campuses and in our community.”

Janson’s latest project involves co-producing a CD of music with Frank Wiley, D.M.A., director of the Kent State University Orchestra. Two of Janson’s works are represented on the CD.

To learn more about the Hugh A. Glauser School of Music, visit www.kent.edu/music/index.cfm.