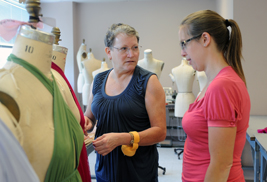 Three associate professors from Kent State University’s Shannon Rodgers and Jerry Silverman School of Fashion Design and Merchandising are donating their time to design and create more than 30 costumes for a local dance troupe headed to London for the 2012 Summer Olympics.

Sherry Schofield-Tomschin, Linda Ohrn-McDaniel and Vince Quevedo are nearing completion of the costumes, which will be worn by the L.I.O.N. Players, a performing arts troupe based in Akron.

The group will be performing in London during the Olympic games, but when its funds were all committed to travel expenses, Kent State’s fashion design professors stepped up to help.

“We’re doing it for fun,” Schofield-Tomschin says. “It was a chance for us to design something we hadn’t done before. It gave us a chance to think about the concept and come up with a design to work in a different medium from what we normally do.”

The trio donated about 150 hours to design and create the costumes, which will be used by about a dozen dancers to portray characters and animals for the dance troupe’s performances based on the stories of creation and the Garden of Eden.  L.I.O.N. Players paid for the materials, while the associate professors donated the designs and the labor to create the costumes at Rockwell Hall, home of Kent State’s Fashion School and the Kent State University Museum.