The Alcoa Foundation, in partnership with Keep America Beautiful and the College and University Recycling Coalition, provided Kent State University with 75 recycling bins as part of the 2013 RecycleMania collegiate recycling competition. 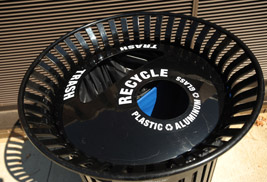 The Alcoa Foundation, in partnership with Keep America Beautiful and the College and University Recycling Coalition, provided Kent State University with 75 recycling bins as part of the 2013 RecycleMania collegiate recycling competition.

The grant is an incentive to boost competition scores for universities and colleges and bring awareness about recycling. This is the second year the Alcoa Foundation provided Kent State with bins.
RecycleMania is an international, friendly competition among colleges and universities. During the competition, the schools compete for awards in nine categories to see which schools recycle the most on a per capita basis, produce the least amount of waste and recycle the largest percentage of their overall waste.

This is Kent State’s fourth year competing in RecycleMania, and, although the university has never placed first, Melanie Knowles, sustainability manager for Kent State’s Facilities Planning and Operations, is happy with the overall success from the program.

According to Knowles, this year’s bins have been placed in the Roe Green Center and in University Libraries building.

“We’re always trying to increase recycling on campus,” says Knowles. “Last year, we increased recycling outdoors. This year, we realized we needed to increase it indoors.”

As part of the grant, Kent State must monitor how recycling increases in both the Roe Green Center and the library.

“We have many opportunities for improvement,” says Knowles. “Every year we see improvement.”

During RecycleMania, Kent State competes in informal head-to-head competitions with other schools including The University of Akron. Not only is the school right down the road, but the two schools usually are neck-and-neck in the rankings.

“This year, we are way ahead of The University of Akron,” Knowles says. “So right now we need to focus on beating Youngstown State University.”

Winners of the RecycleMania competition will be announced this month.

For more information on what items are recyclable, visit www.kent.edu/sustainability/upload/ksu_single_stream_recycling_guide.pdf.  RecycleMania also has a Facebook page.