Kent State University has been selected as a recipient of the 2014 Higher Education Excellence in Diversity (HEED) Award from INSIGHT Into Diversity, the oldest and largest diversity-focused publication in higher education, for the second year in a row. 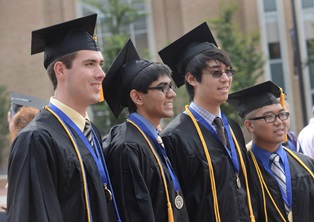 The annual HEED Award is a national honor recognizing U.S. colleges and universities that demonstrate an outstanding commitment to diversity and inclusion. As a recipient of this award, Kent State will be featured in INSIGHT Into Diversity magazine’s November 2014 issue, along with 82 other recipients.

“We hope the HEED award serves as a way to honor those institutions of higher education that recognize the importance of diversity and inclusion as a part of their everyday campus culture,” said Lenore Pearlstein, publisher of INSIGHT Into Diversity magazine.

INSIGHT Into Diversity magazine selected Kent State based on its commitment to making diversity and inclusion a top priority, and its ability to embrace a broad definition of diversity on its campus, including gender, race, ethnicity, veterans, people with disabilities and members of the Lesbian, Gay, Bisexual, Transgender, Queer and Questioning community.

“We are very pleased to know that our continuing success in diversity is honored at a national level,” said Alfreda Brown, vice president of Kent State’s Division of Diversity, Equity and Inclusion.

Kent State’s Division of Diversity, Equity and Inclusion oversees the university’s diversity and inclusion initiatives. Its goal is to maximize individual and collective contributions and create an environment that welcomes diversity of thought, personal growth, academic attainment and above-average achievement.

“We believe we are on a trajectory that is moving in the right direction,” Brown said. “We are motivated and inspired to ensure that Kent State University continues its work toward sustaining an inclusive, nondiscriminatory, welcoming and highly productive workplace and learning environment for all members of the university community.”

For more information about INSIGHT Into Diversity magazine and the 2014 HEED Awards, visit www.insightintodiversity.com.

Photo Caption:
Four friends pose for a photo following Kent State University’s Commencement. Kent State has been selected as a recipient of the 2014 Higher Education Excellence in Diversity (HEED) Award from INSIGHT Into Diversity magazine. The university earned the award for the second time in a row.