Photo of Alfreda Brown and Judy Devine Considered the matriarch of Kent State University Athletics, Devine retired from her post as senior associate athletic director in 2000 following 31 years in a variety of roles within the department. Devine was nominated by Talea Drummer, assistant athletic director at Kent State. In her letter of nomination, Drummer wrote that Devine has “truly blazed a trail for gender equity for student-athletes, coaches and administrators” and “worked hard to make sure that women who participated in athletics were treated fairly.” Drummer mentioned in 2010 that Devine, along with other members of the Department of Intercollegiate Athletics, held a lettering ceremony during Homecoming weekend to honor all of the pre-Title IX female athletes by giving them the varsity letter that was long-deserved. “If it were not for strong and determined women such as her, women (such as myself) would not be allotted the opportunities we have now,” Drummer wrote. 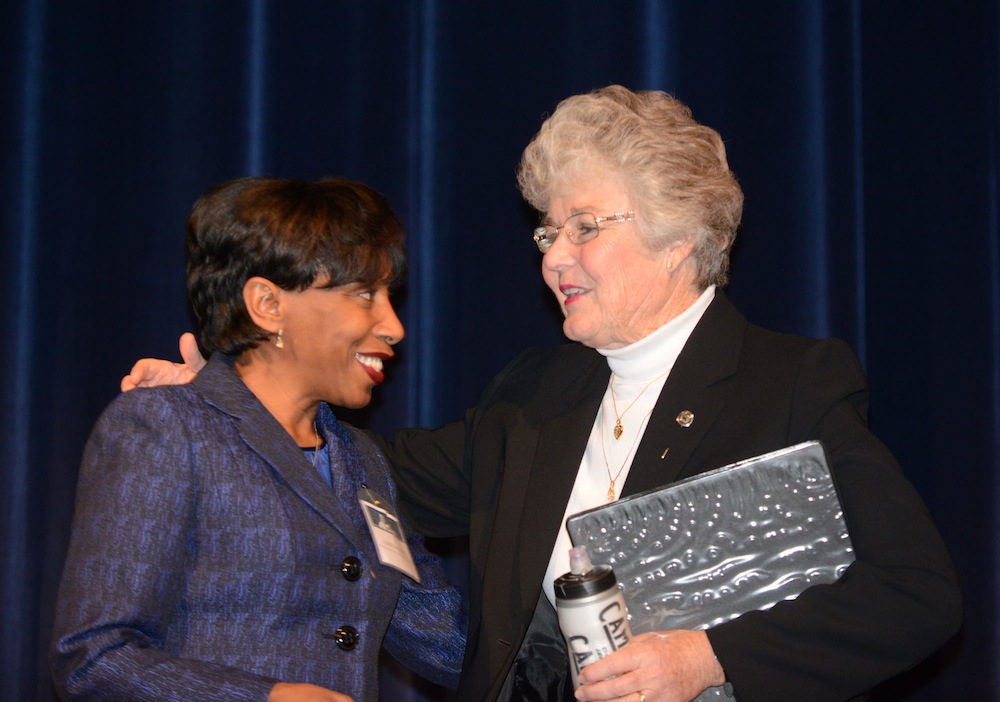 “Needless to say, I am shocked, humbled and honored to think I was even considered for the award, much less selected as the award winner,” Devine said upon learning she is the 2014 recipient of Kent State’s Diversity Trailblazer Award. “The recognition further fuels my passion to continue to work toward the elimination of gender inequity in educational settings.”

The award’s selection committee noted Devine’s dedication to equality and opportunity for women at a point in history when such efforts were not established by legislation. The selection committee also was impressed by the longitudinal efforts put forth by Devine, a commitment to Kent State that spans back to 1969 and has continued long after her retirement.

Devine came to Kent State as a graduate assistant in 1969 and went on to serve as the head coach of the women’s basketball team from 1969-1977 and the head field hockey coach from 1969-1980. When the men’s and women’s athletic programs were merged in 1975, she was given the responsibilities of assistant director of athletics before being elevated to associate athletic director in 1978 and then senior associate athletic director in 1985.

At the time of her retirement, she coordinated financial aid, housing, awards and the academic performance of Kent State’s student-athletes. She also handled compliance and eligibility until 1999. In 2000, the Kent State Board of Trustees granted emeritus status to Devine. In 2003, she was inducted into the Varsity “K” Athletics Hall of Fame, the highest honor bestowed by Kent State’s Department of Intercollegiate Athletics. In addition to permanently endowing the university’s Athletic Academic Honors Dinner and the expansion of the Academic Resource Center expansion, Devine’s contributions toward Kent State total more than $1.4 million.