The National Association of College and University Residence Halls Incorporated, which promotes on-campus living as an integral part of the college experience, named Kent State University winner of the national “Of the Month” award for community 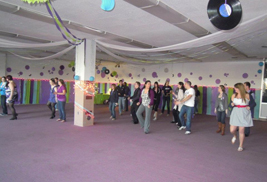 The National Association of College and University Residence Halls Incorporated (NARCURH), which  promotes on-campus living as an integral part of the college experience, named Kent State University winner of the national “Of the Month” award for community service in April. Kent State last won the award in 2006.

The association, considered to be the largest student-run organization in the world with a membership of more than 400 schools worldwide, awarded Kent State for its “Rock Till You Drop!” program in honor of late Hall Council secretary Samantha Lehman. Lehman, who had the genetic disease cystic fibrosis, passed away in February.

“Rock Till You Drop!”—a dance marathon event benefitting the Cystic Fibrosis Foundation— was organized by Kent State’s Centennial Courts C and D Hall Council. Lehman was a resident and active member of the Hall Council until she passed away.

“The Hall Council wanted to do something that celebrated Samantha’s life, and thought the best way  they could do this was by spreading awareness about cystic fibrosis and raising funds to find a cure,” says Betsy Joseph, Kent State director of Residence Services. “’Rock Till You Drop!’ exemplifies the definition of teamwork, service, leadership and community that we try to instill in our students.”

About 50 participants danced continuously for three hours, followed by eliminations in nine style challenge rounds. The last two contestants were each given the opportunity to select their choice of music and show off their best dance moves in 45 seconds. Attendees were allowed one initial vote for their favorites and were subsequently given additional opportunities to vote with dollar donations.

Chrissy Francisco, a senior in the College of Applied Engineering, Sustainability and Technology, won the competition and took home a Nintendo Wii. The students raised $300 during the event, which exceeded their target goal.

Hospitality and hotel management senior Joel John and Katie Fridley, an organizational communication senior, both helped to organize the event.

John says that the program was originally designed as a social event for the hall, and Lehman was involved in planning it before she passed away.  He describes Lehman as a vital part of the Hall Council and residential community.

“When Sam became sick, plans were put on hold temporarily. The day after she lost her battle to cystic fibrosis, my friend Katie and I decided that no one else should lose their battle as well,” he says. “We wanted an event to not only honor Sam, but eliminate the disease that took her away from us. We hope for ‘Rock Till You Drop!’ to become an annual event in memory of Samantha and to benefit the Cystic Fibrosis Foundation.”

Fridley says the dance marathon allowed the students to reflect on Lehman’s life and achievements, while also supporting a good cause.

“Our campus needed to recognize and remember the amazing contributions that Samantha Lehman gave to the Kent State community,” she says. “The dance marathon also allowed the Hall Council to reach out to others and educate them about the most prevalent genetic disease in the United States, while also raising funds to find a cure.”

Participants walked away with a better sense of how this disease affects more than 30,000 individuals in the United States, as well as a feeling of accomplishment that they helped to raise funds for the foundation.

For more information about Kent State’s residence halls or how you can support the cause, visit www.kent.edu/housing or contact the Kent State Chapter of the National Residence Halls Honorary (NRHH) at nrhh@kent.edu or the Kent Interhall Council (KIC) atKIC@res.kent.edu.

For more information about the National Association of College and University Residence Halls Incorporated, visit www.nacurh.org.