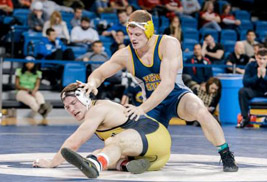 Kent State senior Dustin Kilgore, from Berea, Ohio, continued on his path to wrestling glory, winning a 197-pound Mid-American Conference crown at the University of Buffalo's Alumni Arena. With a 17-5 major decision over Missouri's Brent Haynes in the final, Kilgore became just the sixth four-time MAC champion in conference history and the second in program history. He was also named the tournament's Most Outstanding Wrestler.

"Dustin does what he does and it was great to see him get Outstanding Wrestler," says Head Coach Jim Andrassy. "Stevie wrestled about as well as he could wrestle and Casey's bracket had some of the best guys in the country in it."

As a team, the Golden Flashes finished in fourth place with 82.0 points, just one point behind Northern Iowa in third and six points back of Central Michigan in second. No. 4 Missouri took the team title with 136 points in its inaugural tournament appearance.

Kilgore (39-0) notched his 18th pin of the season in the opening round against Central Michigan's Jackson Lewis. He then won by injury default in the semifinals, before putting together six takedowns and two reversals in the championship round.

The NCAA Championships will be held this month.