With the release of its official 15th day census data, Kent State University has set a new record for spring recorded enrollment.

With the release of its official 15th day census data, Kent State University has set a new record for spring recorded enrollment. Spring 2013 enrollment is up 161 students, or 0.4 percent, for Kent State’s eight-campus system. 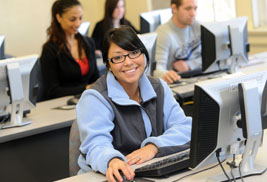 Kent State reports 40,559 students for the spring 2013 semester, compared to 40,398 for spring semester 2012. Unduplicated (or preponderant) headcount at the Kent Campus is 26,461, and the unduplicated headcount for the regional campuses is 14,098. Students are counted only once at the campus at which they hold the majority of their course load.

The previous spring enrollment record for the Kent State University system was set in 2012 with 40,398 students.

“Student success is our top priority at Kent State University, and it shows in our record spring enrollment,” says Kent State President Lester A. Lefton. “Kent State is clearly a first-choice university where students receive a world-class education, and we are committed to seeing each of them reach the finish line to graduation.”

Highlights from the spring 2013 enrollment numbers also include:

“I am very pleased to see spring enrollment grow on the Kent Campus,” says T. David Garcia, Kent State’s associate vice president for enrollment management. “A combination of continued efforts with international recruitment and efforts to retain students currently enrolled are making a positive difference. It is no surprise that some Regional Campuses are experiencing enrollment decreases due to an improving economy and the growth of shale industry jobs in Northeast Ohio.”

For the full spring enrollment report, go to www.kent.edu/rpie/enrollment.