For the Fall 2013 Semester, Kent State University has set a new record, attracting the biggest and highest-achieving freshman class at the Kent Campus in the university’s 103-year history. With the release of the university’s official 15th day census data for the Fall 2013 Semester, Kent State reports the total number of first-time, full-time freshmen enrolled at the Kent Campus is 4,314. This exceeds last year’s freshman class count of 4,076 by 5.8 percent. It also surpasses the record set in 2011 of 4,284. 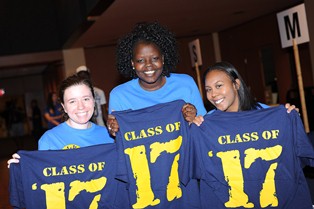 “We are welcoming our largest and most academically motivated freshman class,” said Kent State President Lester A. Lefton. “The average GPA of our new freshmen is 3.3, which is terrific. More than 75 percent of our incoming freshmen have GPAs of 3.0 or higher. This is exactly what the state has asked us to do. We are enrolling more students who are academically prepared, and then we are retaining and supporting them on their journey to graduation. Kent State is doing its part to help Ohio produce more quality graduates and serve as an economic engine for the region and the state.”

Kent State also announced total enrollment at the Kent Campus is a new record. Unduplicated (or preponderant) headcount at the campus in Kent for fall 2013 is 28,019, which represents an increase of 313, or 1.1 percent, compared to last year’s record. Total enrollment for the Fall 2013 Semester across the university’s eight campuses is 41,891 students. The unduplicated headcount for the Regional Campuses is 13,872. Students are counted only once at the campus at which they hold a majority of their course load.

With the university focusing on retention and graduation, retention of Kent Campus freshmen has increased to 77.6 percent, up from 77.1 last year. This represents the percentage of freshmen who continue their studies at the university for their sophomore year. Retention at the Regional Campuses experienced a significant increase to 56.1 percent, up from 52.5 percent last year.

Highlights from the fall 2013 enrollment numbers also include:

“Over the last few years, we have been working hard to attract the best and the brightest to our great institution,” Garcia said. “In order to build the academic profile of our freshman class, we need to build our application pool. This allows us to be more selective, accepting those who are academically prepared for the rigorous academic experience here at Kent State. It will pay back in dividends with retention and graduation rates.”

Photo Caption:
Kent State University freshman students hold up “Class of ’17” shirts they received during a Welcome Weekend event. For the Fall 2013 Semester, Kent State has set a new record, attracting the biggest and highest-achieving freshman class at the Kent Campus in the university’s 103-year history.