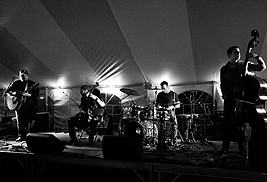 Kent State University journalism student Erik Urycki, and alumnus Pat Hawkins, together with other members of their Kent-founded band, The Speedbumps, are scheduled to perform with the Canton Symphony on Oct. 26, at 8 p.m.

Hawkins, who is the band’s drummer, graduated in 2007, and Urycki, who is a songwriter, vocalist and guitarist, graduates in May. Urycki worked at WKSU in the past and has helped with the recording of the Canton Symphony.

The Speedbumps have been together for seven years and have a number of accomplishments under their belts. The band has released two albums with the current band members and in 2011, they won an Independent Music Award for Best Adult Contemporary Song of the Year for their song “I Come From A Town.”

“Now we are in the process of writing our next album, which I think could catapult us into greater opportunities to grow,” says Hawkins.

This growth, Hawkins mentions, recently manifested itself as a once-in-a-lifetime opportunity: a performance with the Canton Symphony.

“We were listening to them play at Panini’s in Canton and [my husband] said, ‘You know, these guys would be great with the symphony,’” says Mullaly. “That put the idea in my head. I’m so excited to have them perform with us.”

Hawkins expressed his excitement for this rare opportunity.

“We are so excited, nervous, scared all wrapped up in a tortilla,” says Hawkins. “It’s one of our dreams to have a whole symphony performing all of our music with us.”

“He wrote out all the music for the musicians in the Canton Symphony for our show on the 26th,” says Hawkins.

This night is even more special for The Speedbumps because they have decided to dedicate it to a very important person.

“It will be a special evening for me and my family, as well, because we are dedicating this show to my father, Joe, who passed in January,” says Hawkins. “I grew up in Canton, so there will be a lot of my family and friends there to share this special night. In fact, we wrote a song called ‘Big Joe,’ which the symphony will be performing with us. There probably won’t be a dry eye in the building.”

For more information and tickets for the performance, visit www.cantonsymphony.org or call the box office at 330-452-2094.