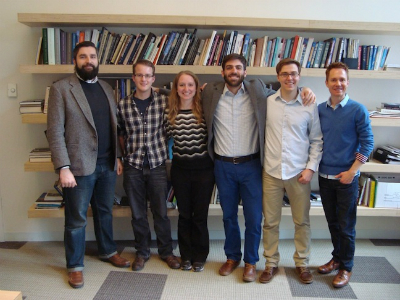 “The Cleveland Urban Design Collaborative has led submission entries to the Urban Land Institute competition several times in the past, but this is the first time a submission from Cleveland has been selected for an honorable mention,” Jurca said.

The competition involved the redevelopment of several blocks in downtown Minneapolis. The competition brief asked teams to create feasible proposals for transforming the mostly surface parking lots on the site into active mixed-use development. The students had two weeks from the day the site was announced to complete the project.

“Active East’s” proposal focused on maximizing opportunities for physical activity year round, which included extending the new Vikings pro-football stadium’s pedestrian spaces into the surrounding urban neighborhood, configuring buildings to block winds and allow for more sunlight and increasing the use of outdoor spaces during winter months.

Jurca believes that the competition was a beneficial experience for students because of the disciplines involved in putting the proposal together.

“Not only were the students required to design the form of the buildings and public spaces, but they were also mandated to include a thorough financial analysis of the proposal,” Jurca said. “The multidisciplinary nature of the Urban Land Institute competition offers a unique and valuable real-world experience for the students. The intense two-week time frame forces the students to learn how to delegate responsibilities and execute quickly.”

Markwardt said participating in this event helped all of them learn.

“The fact that it was multidisciplinary and the level of reality that the competition demanded made it educational for all involved,” Markwardt said. “It allowed each of us to think beyond our own discipline so that we could learn how each of our decisions affected other aspects of making this sort of project occur in the professional world.”

She said the team was very excited to receive the honorable mention, and she believes they received it because of some key elements of their proposal.

“If I had to narrow it down to one thing that allowed us to stand out, I would say it was how we focused both the design and the financial implications surrounding multigenerational development,” Markwardt said. “There were many teams competing from schools all over the United States and Canada, so we were honored to have received recognition where there were so many well thought-out and presented solutions for the site. Most of all, we are very proud to have represented both Cleveland and our respective universities on a national level.”

Douglas L. Steidl, dean of Kent State’s College of Architecture and Environmental Design, said this honorable mention is a significant step up for the college and its Master of Urban Design program.

“This achievement signifies that our urban design students, working collaboratively with an MBA student from Case Western Reserve University and an urban planning student from Cleveland State University, are capable of analyzing, conceiving and producing a creative design concept for urban populations equivalent to any student team in the United States,” Steidl said. “We’ve known our graduates produce superior work. This is an endorsement of that fact from one of the most respected national urban design organizations.”

Kent State’s Cleveland Urban Design Collaborative is the combined home of the urban design graduate program at Kent State and the public service activities of the College of Architecture and Environmental Design. The graduate program offers a professional degree in architecture with a focus on urban design, as well as a Master of Urban Design degree for students with a prior professional qualification in a design discipline. Certificate programs are also available.

For more information about the team’s submission to the Urban Land Institute competition, visit www.uli.org/hines-competition/2013-hines-=competition-honorable-mention-...