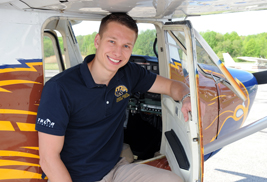 Kent State University aeronautics student Ryan Weber, from Chardon, Ohio, won the top spot in the power-on landing competition at the National Intercollegiate Flying Association’ s Safety and Flight Evaluation Conference (SAFECON 2013) in Columbus, Ohio, on May 11. SAFECON is a national competition that brings together more than 300 students from 30 colleges and universities from across the country to vie to be the national champions for both team and pilot honors. The competition develops and advances aviation education through a strong emphasis on aviation safety.

Weber, a member of Kent State’s Precision Flight Team, competed against more than 140 students from aviation colleges and universities across the nation.

“Winning the SAFECON short-field landing national championship has been one of my greatest moments,” Weber says. “All my training and practice came down to one event. I cannot explain the emotion that came from the win. It has been a challenging, but fun road.”

Weber attributes his success at the competition to his training at Kent State.

“Kent State gave me the opportunity to succeed in this event,” he says. “It started with my very first lesson in flight back in January 2011. I learned many valuable lessons and skills. They also allowed me to use the airplanes to practice landings for many hours in the months leading up to the competition.”

Kent State Assistant Professor of Aeronautics and Precision Flight Team Advisor Richard Mangrum describes Weber as an accomplished aviator whose achievements have far-reaching benefits for all of the traveling public because he and other successful student pilots like him will end up as crew and pilots for commercial airlines.

“We are all very proud of his accomplishment,” Mangrum says. “Being the best at a landing competition with the top teams in the nation competing is a very strong statement about his abilities. The Kent State Aeronautics program has a long and successful history in doing well and winning the top spot in the short-field landing and the power-off landing events; we have several national champions to our credit. It is evidence that our program is truly among the elite flight training programs in the country.

“Because of the global nature of aviation, every time one of our students strives to land or navigate or perform any other task just a little better than their peers, the ripple effect of that effort is also global,” Mangrum adds. “The skills and achievements of a competitor on the flight team at SAFECON is a critical element of what we do in collegiate aviation.”

“Ryan is now the number one power-on lander of a single-engine airplane of all the flight training students in the nation,” Carstensen says. “This is a top award distinction worthy of celebration at Kent State.”