Five Kent State students received the opportunity of a lifetime working behind the scenes at the Bon Jovi “Because We Can” concert at Cleveland’s Quicken Loans Arena in March.

Five Kent State students received the opportunity of a lifetime working behind the scenes at the Bon Jovi “Because We Can” concert at Cleveland’s Quicken Loans Arena in March. These students had the opportunity to learn about tour production. 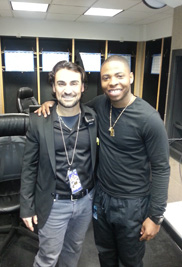 Chosen based on leadership skills and a history of volunteerism, the students worked with the Bon Jovi crew as a part of the band’s community service initiative, “Bon Jovi ‘Because We Can’ Community Service College Campaign.”

The concert experience allowed the students to work with the band’s tour management and production teams to learn what is involved in putting together a tour production.

Lagore was selected based on his leadership experience and his involvement in Kent PRIDE!, undergraduate student government and student media.

“We spent the entire day backstage and worked with the tour management team,” Lagore says. “We set up the VIP room, toured backstage, handed out tickets and escorted VIP members.”

Lagore explains his favorite part about his experience was watching everything come together.

“The tour manager’s mom, also one of the assistant managers of the tour, talked about how it reminded her of when she played Legos with her son,” Lagore explains. “Everyone builds his or her own piece and then everything comes together. I thought it was an interesting analogy. It was really cool to see everyone work together, understanding his or her place and job, even in a stressful environment.”

Holton also provided an extra hand behind the scenes.

“I really enjoyed the work, but the interaction with the professionals was great,” says Holton. “You don’t often get the chance to network and talk to people who manage a tour. Getting the opportunity to meet and talk to those people was great.”

As the director of programming for undergraduate student government – and with an additional perspective since working at Blossom Music Center – Holton was able to expand on her prior knowledge and get a first-hand look at what it takes to organize a major production.

Radcliffe watched in awe as the process unfolded.

“The thing that stood out to me the most was seeing everything before the show and how everything came together in the end,” he says.

Radcliffe explains his experience as truly a once-in-a-lifetime opportunity.

“It was amazing,” Radcliffe says. “Words can’t even describe what I experienced.”