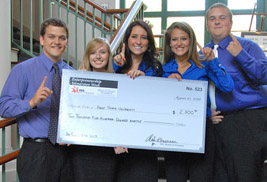 Entrepreneurship Immersion Week is an intensive one-week immersion experience, allowing undergraduates of all majors to learn what it takes to develop new business concepts. Participants take classes, network and end the week competing in a business concept competition.

Denise M. Easterling, CPA, instructor of entrepreneurship at Kent State University, was the lead faculty member for the week.

“Entrepreneurship Immersion Week is more or less an entrepreneurship boot camp,” Easterling says. “The students spend Sunday through Friday together living on campus and staying in residence halls.  As a group, they go through academic classes and network, and then each team comes up with an idea. On Friday they present their idea and compete for award money.”

“The competition is open to everyone on campus and multiple students applied, but we ended up with five entrepreneurship majors,” Easterling says.

This year the Kent State team developed an idea named “Quick O.R.,” a way to improve the efficiency in an operating room.

“They are talking about actually developing it,” Easterling says. “O.R. rooms can be inefficient because of a lot of equipment and people in the room at one time.”

Easterling says the team called and talked to a few hospital surgeons and surgical assistants who agreed their solution would help solve the problem.