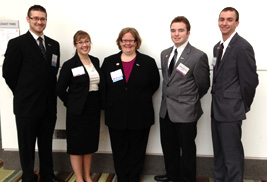 The Kent State University at Trumbull Enactus team was named a regional champion at the Enactus United States Regional Competition held April 12 in Chicago. The event is one of 10 regional competitions staged across the country in March and April.

Enactus is a community of student, academic and business leaders committed to using the power of entrepreneurial action to enable human progress. Enactus establishes student programs on college campuses across the nation. Student members apply business concepts to develop community outreach projects, transform lives and shape a better, more sustainable world. The Kent State Trumbull team is one of more than 500 Enactus programs across the United States.

“With more than 75 other universities competing in Chicago alone, our team was nervous, but we felt really confident about the projects we were presenting. We came ready to win,” says Klecha, co-president of Kent State Trumbull’s Enactus team.

During the 2012-2103 academic year, the team organized two projects in Trumbull County. The first was a series of job-readiness workshops, with the goal of empowering the students from Warren’s Inspiring Minds program to be better prepared on their path toward higher education and employment opportunities. The team also presented its Flash 2.0 project, which focused on developing applications for organizations, including Kent State Trumbull, the Warren Township Fire Department and Sam’s Club of Boardman to reduce the amount of paper used to print daily reports. The project called for the creation of a smartphone application that could convert paper-intensive reports to a paperless format, thereby saving environmental resources (trees) as well as money (less paper, toner, printing labor, etc.). In the case of Sam’s Club, it was projected that a savings of more than $30,000 (annually) could be realized through the conversion of just one of their internal reports.

“The projects that we select each year are those that not only have a business focus, but also can impact the lives of others and bring about a sustainable change,” says Jackson, Enactus team co-president.

The culmination of the Enactus program is an annual series of competitions that provide a showcase for teams to present the results of their projects and be evaluated by business leaders. Teams first compete at the regional and national levels, then at the international level when the national champion teams from each country meet at the Enactus World Cup, which is slated for Sept. 29-Oct. 1 in Cancun, Mexico.

As an Enactus U.S. Regional Champion, Kent State Trumbull’s Enactus team now advances to the 2013 Enactus U.S. National Exposition which will be held May 21-23 in Kansas City, Mo.