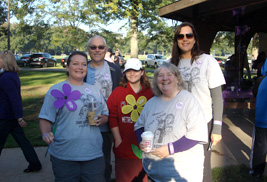 On Sunday, Sept. 29, members of the Kent State University at Trumbull Student Nursing Association, their family members, friends and past graduates took part in the National Alliance on Mental Illness Mahoning Valley Three Mile Walk at Austintown Park in Austintown.

With a group of 75 participants on hand, the Kent State Trumbull Student Nursing Association marked its eighth consecutive appearance at the event.

The National Alliance on Mental Illness is the nation’s largest grassroots mental health organization dedicated to improving the lives of individuals and families affected by mental illness. It has more than 1,100 affiliates in communities across the country that engage in advocacy, research, support and education.

Meanwhile, in support of caregivers and those stricken with Alzheimer's, the cast and crew of Kent State Trumbull Theatre's production of Day Trips participated in the annual Alzheimer's Association Walk at Perkins Park in Warren. The group raised hundreds of dollars to be used in the fight against Alzheimer's. Day Trips, which opened Friday, Oct. 4, at the Kent State Trumbull Theatre, centers on the life of one such caretaker. Day Trips was written by Jo Carson and directed by Daniel-Raymond Nadon.