For Kent State University at Trumbull sophomore and visual communication design major Jason Liccardi, art is in the blood. 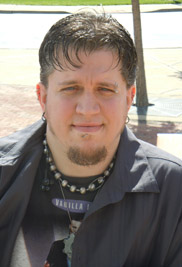 For Kent State University at Trumbull sophomore and visual communication design major Jason Liccardi, art is in the blood.

“My grandfather was an artist and so was my dad,” says Liccardi. “But never anything like this. The majority of their works were just for the family. I guess I can say I’m the most successful of the three.”

This past summer, Liccardi was chosen by Kent State Trumbull Associate Professor of Art Phillip Buntin as a nominee to provide illustrations for Michigan-based author Jane Hicks’ first book, The Magic Potion: A True Fairy Tale With a Happy Ending, which is now available through Balboa Press, Amazon and Barnes and Noble websites.

The book is based on a true story and deals with the struggles of a family of lovebirds that are dealing with the hard feelings that separation and divorce can bring about. Hicks’ goal in writing the book was to provide adults and children alike with a “recipe” to help dispel some of the negativities that those types of situations often bring about.

“Jason is an exceptional student with an exemplary work ethic, facility and creativity,” says Buntin. “Both my awareness of his conscientiousness and his natural skill and interest in illustration helped me realize that he would be perfect for this opportunity. I am very excited to keep up with what he does artistically in the future.”

“The whole process has been a bit surprising,” Liccardi says. “I mean, even though I’ve been drawing since I was eight or nine years old, I’m really just a first-year student and didn’t really believe I had done anything to bring any attention to myself, and then all this happened.”

For Liccardi, whose work normally mirrors more of a comic book or graphic novel style, Hicks’ book represents a bit of departure in that the story is told in a fairy tale fashion.

“Yeah, the reactions I’ve been getting when I’ve told friends and family about what I’ve done have come with puzzled looks,” says Liccardi, better known for putting his renditions of superheroes down on paper than a family of lovebirds. “It’s definitely been something different, as well as a bit of a challenge, but as an artist, that’s what I like to do; kind of put myself to the test, I guess.

“Overall, it has certainly been a departure from the usual stuff, that’s for sure,” he adds.

But that departure is also providing both Liccardi and Hicks with potential for additional exposure and growth courtesy of Liccardi’s employer, Target, which is looking into carrying the book at its Niles location.

This story was first published in Campus Connections, the Kent State University at Trumbull newsletter.