Kent State University is participating in the annual RecycleMania challenge, an international competition where colleges and universities strive to reduce waste and increase recycling.

Kent State University is participating in the annual RecycleMania challenge, an international competition where colleges and universities strive to reduce waste and increase recycling. The month of February marks the official start of the 2013 RecycleMania calendar. 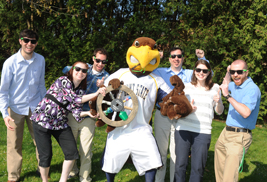 RecycleMania is supported by the sustainability office, which specializes in the ongoing recycling efforts at Kent State University.

“Residence Services is bringing the friendly competition a bit closer to home for students by presenting a hall-versus-hall challenge,” says Andy Weyand, assistant director for administrative operations and facilities, at Residence Services. “The recycling collections from each hall will be measured and scored, and after eight weeks, Residence Services recognizes the building(s) that recycled the most per capita. A $200 recognition goes to the hall council representing the winning building.”

"This will be Kent State’s fourth year participating in the tournament and the second year competing head-to-head with the University of Akron for the recycling ‘Braggin’ Wheel,’” says Melanie Knowles, sustainability manager at Kent State University.

“We’ve dubbed the traveling trophy as the RecycleMania ‘Braggin’ Wheel,’ and I should proudly point out that the Golden Flashes are in possession of said trophy,” says Weyand. “We want to keep it for 2013!”

Knowles says that the eight-week tournament is a good time for students, faculty and staff to be mindful to reduce, reuse and recycle.

“On-campus recycling is single stream, which means that plastic containers (#1 and #2), glass, aluminum, paper, paperboard and corrugated cardboard, can all go in the same recycling container, indoors or outdoors,” Knowles says.

“I can speak for Residence Services – our resident assistant, hall director, assistant hall director, housekeeping staff, and administrative staff members each play a role in the RecycleMania challenge each year,” says Weyand.  “It’s a two-month span that we really focus on building the habit of recycling.”

The tournament is for the entire campus. By framing recycling in competitive terms, RecycleMania seeks to tap school spirit as a motivator to reach students and staff who may not otherwise respond to environmental messages.

“The larger outcome for the program is to build awareness of the campus recycling programs across North America and to have one collective push toward building the recycling habits of those individuals on and visiting the campus,” says Weyand.

"We’d like to see the faculty and staff start thinking green and carrying it back to the classroom or the office, says Bill Steiner, director of Portage County Waste. “Making recycling a priority will really help out the local economy. The waste district has a $2 million impact on the economy through our wages, taxes and business. "