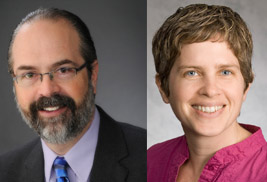 Kent State University at Stark recently announced the recipient and finalists of the 2011-2012 Distinguished Teaching Award and the recipient of the Award of Distinction. These honors were presented during the Spring 2012 Commencement.

This year’s recipient of the Distinguished Teaching Award, a tribute which is presented to a full-time Kent State Stark professor, is Carey McDougall, M.F.A., an associate professor of art. A resident of Canton and native of Woodbury, Conn., McDougall has been a Kent State University employee since 2003. She earned a bachelor’s degree in mathematics from Oberlin College, a master’s degree in liberal studies from Wesleyan University and a Master of Fine Arts degree from the University of Connecticut.

At Kent State Stark, McDougall instructs the following courses: Sculpture, Drawing and Performance Art. She is actively involved with her students, advising them and encouraging their creativity. In addition to serving as the 2011-2012 Kent State Stark Faculty Council chair, she is a member of the Kent State University Regional Campus Faculty Advisory Committee, the Stark Campus Conceptual Master Plan Committee and the 2012 Activities Budget Committee. McDougall also is the institutional representative of the Ohio Women’s Network for the American Council on Education’s Office of Women in Higher Education.

Included in the numerous nominations submitted for McDougall, one student wrote, “She goes above and beyond any professor or teacher I have ever had. She has a great personality, full of energy and excitement, making her classroom a wonderful environment. She is constantly helping students with everything from deciding on a major, to helping them get internships and jobs, to writing cover letters. You name it, and she’s there to help to the best of her ability. I have been in a lot of studio classes and no teacher ever comes close to measuring up to her as a teacher and a person.”

McDougall is honored to receive the Distinguished Teaching Award.

“I have grown as a teacher because of the students and faculty at Kent State Stark who continue to challenge and inspire me,” she says. “I know that so many of my colleagues, if not all of them, are equally recognizable, so I hope that I can stand to represent all the distinguished pedagogy that our faculty engages with to create the unique campus that Kent State Stark is.”

The finalists for the Distinguished Teaching Award are Sebastian Birch, D.M.A., associate professor of music, and Carrie Schweitzer, Ph.D., professor of geology. Birch, a resident of North Canton, earned his bachelor’s of music degree in composition/piano and master’s of music degree in composition from Cleveland State University. He was granted a Doctoral of Musical Arts from the Cleveland Institute of Music. Schweitzer, a resident of Kent, holds a Bachelor of Arts in biology from Hiram College. She earned a Master of Science and doctorate degrees in geology from Kent State University.

The recipient of the Award of Distinction, an honor presented to a part-time Kent State Stark faculty, is Mark Schulz, an adjunct professor of music and a resident of Canton. A member of the Kent State Stark faculty for two years, Schulz teaches Music Production, Rudiments and Fundamentals of Music Theory and Applied Guitar and Bass, in addition to directing students in the Thursday Studio Ensemble. He earned his bachelor’s and master’s degrees in music technology from The University of Akron, as well as studied cello performance at Baldwin Wallace and Jazz Guitar at Berklee School of Music. Schulz is currently completing a master’s degree in music theory at Kent State University.

A student’s nomination for Schulz stated, “All students feel very comfortable with him. He is a great teacher who grades evenly and helps students understand music.”

In response to his selection for the award, Schulz says, “I’d like to thank my students for this very special recognition. It is my pleasure to teach and work with our students and see them grow and advance with each new semester. Success as a teacher has everything to do with the quality of the students one has the opportunity to engage, and I am fortunate to have those high-quality students. I’d also like to recognize my fellow colleagues in the Department of Fine Arts. The adjunct and applied music faculty members are all hard-working, dedicated and caring teachers who deserve recognition. I believe our music students would be hard-pressed to find a better value for their education dollar. I consider this the most prestigious award I’ve ever received because it comes from the students!”

A selected committee, consisting of representatives of the Kent State Stark faculty and students, chose the recipients and finalists for these awards after thorough examination of the nominations submitted by members of the campus community. Each finalist met the needed criteria, which consisted of being an instructor at Kent State Stark, having comprehensive knowledge of his or her field, being effective in organizing and presenting classroom material, having the ability to stimulate thinking and develop the students’ understanding, demonstrating resourcefulness, being able to arouse student interest, and having concern for students.

For more information about the Distinguished Teaching Award and Award of Distinction recipients and finalists, contact Cynthia Williams at 330-244-3262 or cdwillia@kent.edu.