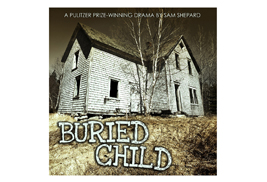 Kent State University at Stark will kick off its first theatrical event of the 2012-2013 season with Buried Child by Sam Shepard on Nov. 2, 3, 9 and 10, at 8 p.m., and on Nov. 4 and 11, at 2:30 p.m. in the Kent State Stark Theatre, 6000 Frank Ave. NW in Jackson Township. The show is for mature audiences only. American Sign Language interpretation will be provided for the performance on Nov.  11.

Shepard’s Pulitzer Prize-winning drama takes a macabre look at the disintegration of the American dream. Mystery and humor combine in the Midwestern home of a dysfunctional family with a very dark secret that plunges them into bizarre degeneration and finally, toward hope.

Ticket prices are $10 for adults and $7 for non-Kent State students, children under 17 and senior citizens. All Kent State students are admitted free of charge with a current student ID. Reserve tickets online atwww.stark.kent.edu/theatre or call the Kent State Stark Theatre Box Office at 330-244-3348, Mondays through Fridays from 1 to 5 p.m.