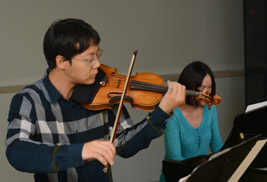 Kent State University senior music performance major Yang Zeng has been offered a contract to be part of the first violin section of the Akron Symphony. Zeng, originally from Kunming, Yunnan, China, has been a student at Kent State’s Hugh A. Glauser School of Music since 2010. He started studying music at age six.

An only child, due to China’s one-child rule, Zeng was entered into the Shanghai Conservatory of Music to pursue elementary secondary and music studies, taking him far from his parents at the young age of 10. For 11 years, Zeng lived with his grandparents while studying at the conservatory.

“It's different and challenging performing in a professional orchestra, but it’s a good opportunity and nice experience to play in the Akron Symphony,” says Zeng. “To become a good orchestra player is a whole different thing compared to playing solo or chamber music. I want to keep learning, practice even more and get better.”

After graduating from the conservatory, his teacher introduced him to Ivan Chan, former member of the Miami String Quartet. In 2010, Chan returned to his homeland of Hong Kong where he instructs at the Hong Kong Academy for the Performing Arts. Chan serves on many juries for violin and chamber music competitions around the world, and is a famous violinist in his own right. After meeting Zeng and hearing him play, Chan recommended Zeng to study with his friend and former counterpart in the Miami String Quartet, violinist and faculty member at the Hugh A. Glauser School of Music, Cathy Meng Robinson, which is how Zeng ended up at Kent State.

“Yang Zeng is an extremely gifted young violinist who is a joy to teach,” says Meng Robinson. “His exceptional technique and strong sense of musicianship are complemented by his humble nature, and I have no doubt that he will have a wonderful career in music. He is very dedicated, disciplined and always strives for excellence in everything that he does. He is a wonderful example to his peers of what it takes to be successful.”

Zeng auditioned and made it three times into the world-recognized chamber music intensive at Kent State – the Kent/Blossom Music Festival.  He was able to continue his studies with Meng Robinson, as well as begin studies with The Cleveland Orchestra’s Amy Lee. Zeng also won the annual Concerto Competition at Kent State and performed “Concerto for Violin and Orchestra in A minor, Op. 53” by Antonín Dvořák with the Kent State University Orchestra.

In addition to the contract with the Akron Symphony, Zeng has been offered a contract as the principal second violin for the Mansfield Symphony and has received an invitation to participate in the Music from the Western Reserve Concert Series in Hudson.

Zeng is currently studying with Meng Robinson and Lee. He also plays the viola.