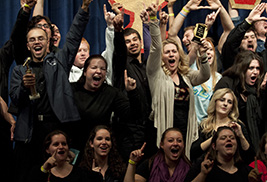 Songfest is the Greek community’s annual philanthropy event, which brings sororities and fraternities together for a good cause through singing, dancing and acting. The community selects an organization each year to support, and then chapters are placed into teams in order to raise money and awareness for the cause, as well as create performances for the show.

Meredith Bielaska, assistant director for Greek Affairs, advises the Greek community and knows how hard the chapters work to make Songfest a success.

“It’s incredible what the community does with Songfest. Once groups are selected, the chapters have only three weeks to practice and fundraise,” Bielaska says. “Each year, they want to outdo the previous year’s efforts, and they keep succeeding.”

The Greeks took the stage on Saturday, Nov. 9, for Songfest 2013 with hopes of raising awareness for the Rape, Abuse and Incest National Network (RAINN) and reaching their fundraising goal of $30,000.

This year’s Songfest winners were the group of Sigma Sigma Sigma, Sigma Phi Epsilon, Phi Kappa Tau, Tau Kappa Epsilon and Phi Iota Alpha; however, the entire Greek community should be applauded for their efforts.

Once all the ticket sales and online donations were totaled, the Greek community had raised an incredible $49,027, which far exceeded their goal and set a new Songfest record.

Chris Moyer, senior architecture major and vice president of philanthropy and community service for the Interfraternity Council, says, “When we finally totaled everything up, it was just a moment of complete disbelief of how much we raised this year. It blows everything out of the water, and it’s become the largest philanthropy we’ve ever had as a Greek community.”

For more information about Greek Life at Kent State, visit www.kentstategreeklife.com or contact Bielaska at mbielask@kent.edu.