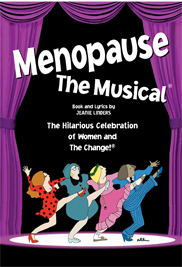 The international hit show, Menopause The Musical®, is coming to the Performing Arts Center at Kent State University at Tuscarawas on Oct. 9 at 7:30 p.m. Tickets range from $33-$48 and can be purchased now at the Performing Arts Center box office, online at www.tusc.kent.edu/pac or by calling 330-308-6400. The box office is open Monday through Friday, from 8 a.m. to 5 p.m.

The show is set in a department store where four women with seemingly nothing in common but a black lace bra meet by chance at a lingerie sale. The all-female cast makes fun of their woeful hot flashes, forgetfulness, mood swings, wrinkles, night sweats and chocolate binges. A sisterhood is created between these diverse women as they realize that menopause is no longer “The Silent Passage.” It is a stage in every woman’s life that is perfectly normal.

Menopause The Musical® is produced by GFour Productions and is the work of writer Jeanie Linders, director Seth Greenleaf and choreographer Daria Melendez. The laughter-filled 90-minute production includes parodies from the classics of the ‘60s, ‘70s and ‘80s. It is estimated that nearly 11 million women have attended a performance since the 2001 opening in Orlando, Fla. Inspired by a hot flash and a bottle of wine, writer and producer Linders created the show as a celebration of women who are on the brink of, in the middle of, or have survived “The Change.”

Menopause The Musical® has entertained audiences across the country in more than 450 U.S. cities, nearly 300 international cities and a total of 15 countries. For more information, visit www.menopausethemusical.com.

The Performing Arts Center at Kent State Tuscarawas is located at 330 University Dr. NE, New Philadelphia. Free parking is available for all shows.