Skip to main content
Live Chat
Megan Conrad (fifth from left) is recognized at a Kent State basketball game. She is joined by her family along with representatives from Kent State’s administration, College of Business Administration, PNC and Flash, the mascot. 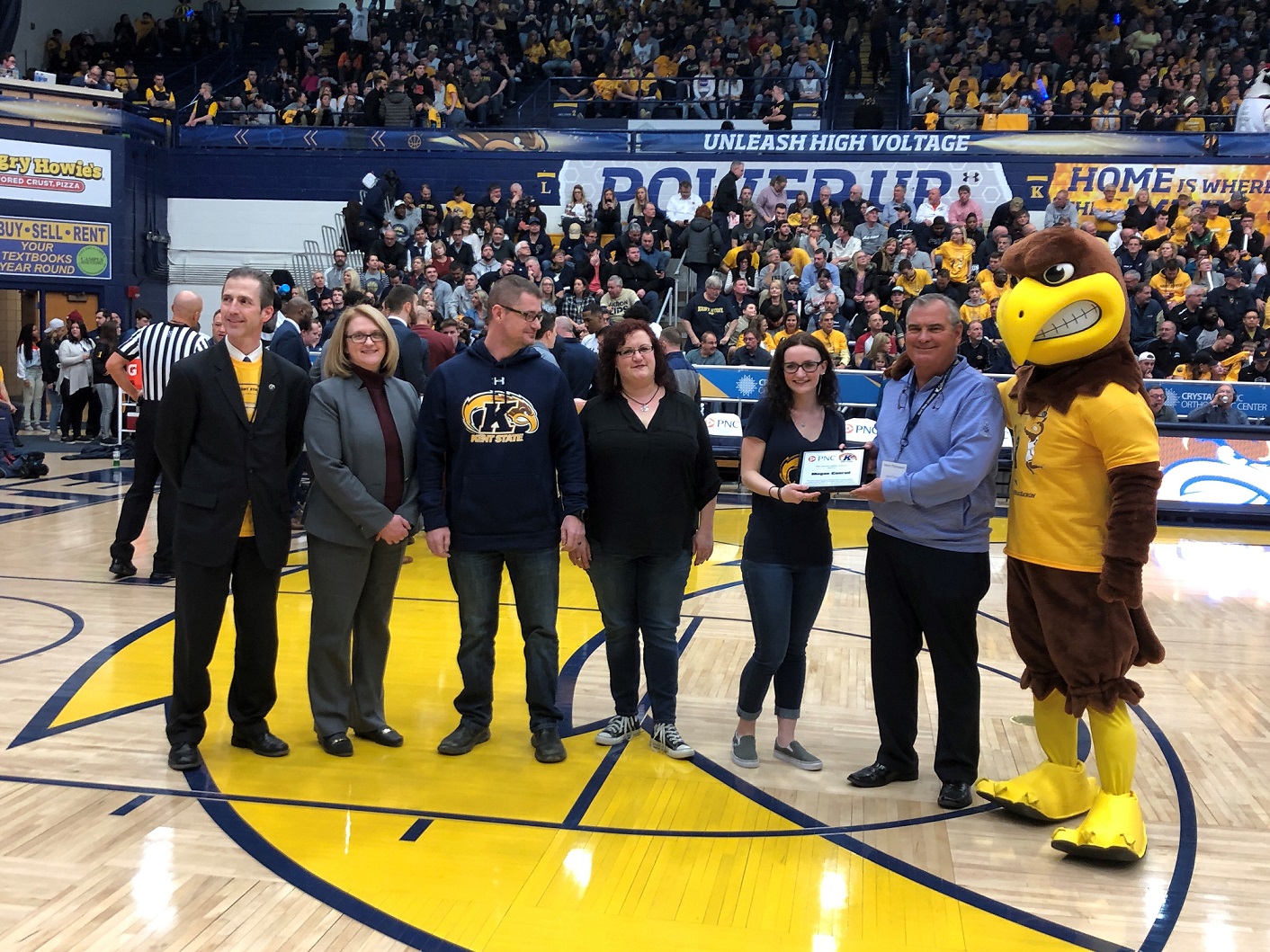 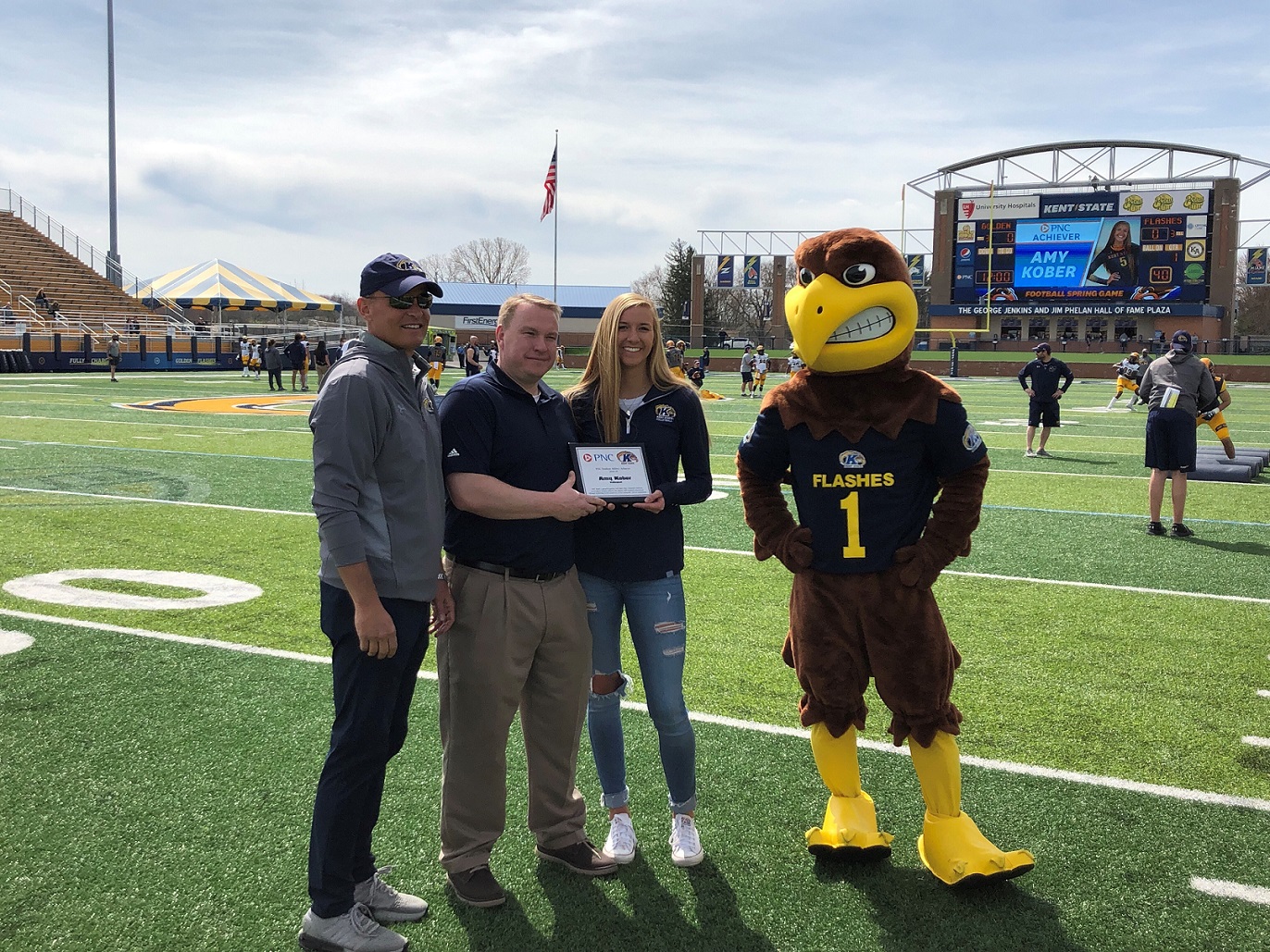 Each semester, PNC recognizes two outstanding Kent State University students as PNC Achievers. These students exemplify excellence in the classroom, in the community, and in student leadership and development. Congratulations to the Spring 2019 PNC Achievers!

Megan Conrad has a saying: You get out what you put in.

At only 20 years old, the marketing major at Kent State is definitely getting a big return on her efforts throughout the campus – so much so that she has been named a PNC Student Achiever in the spring semester. The award is given to two students each semester who excel in college.

Ms. Conrad, who hails from Rocky River, Ohio, is taking advantage of everything the college has to offer.

In addition to holding two part-time jobs on campus, Ms. Conrad is the president of the Kent State chapter of the American Marketing Association. She coordinates bringing in guest speakers, workshops and helping students refine their portfolios.

She is also the president of the Student Advisory Council in the College of Business Administration’s Career Services Office. Her goal is to rebuild the office as a liaison for students.

If that is not enough to keep her busy, Ms. Conrad is the vice president of the Business Professionals Roundtable and is a student success specialist. In the latter role, she provides guidance and helps students create career goals.

“I do it because I’m helping others,” she said. “I’ve had people cry and hug me, and I feel as though I’m actually making a difference, even though it’s one student at a time.”

But, for now, she is humbled by the recognition by PNC for her work in building her own career.

“I know firsthand how many amazing students there are in the college,” Ms. Conrad said. “I like to be the silent person, but to see that the college felt strongly about me and to know everything I’ve done has made a difference, that meant a lot to me.”

At 22, Amy Kober has already learned a valuable lesson: to make every moment count. And she is living that mantra.

As a senior studying public health at Kent State, Ms. Kober is making the most of her time by networking, volunteering, being involved in professional groups and volleyball, and maintaining her 3.9 grade point average.

Her hard work is already paying off. Ms. Kober was selected as a PNC Student Achiever in the spring semester. The award is based on overall achievement in college. Ms. Kober feels honored to be chosen because it focuses on her academic performance rather than just success on the volleyball court.

“It’s always nice to be recognized, but the fact that the award focuses on people who excel in the classroom is important,” she said. “You have to have the entire package.”

After her graduation, Ms. Kober wants to fulfill her lifelong dream of living in New York City for at least a year. It is a long way from her hometown of Grand Haven, Michigan, but she is ready.

With hopes of eventually becoming a hospital CEO, she is already applying for positions at various hospitals in New York, and she plans to obtain her master’s degree in hospital administration.

When she is not studying, Ms. Kober enjoys reading, puzzles and attending musicals. She is a member of the Student Athlete Advisory Council and the Kent State Leadership Institute, and she volunteers in a variety of ways. After volunteer trips to Costa Rica, Belize and South Africa, she vowed to change her ways.

“It made me value spending quality time with others and to spend less time on my phone,” she said.