Professor: Man Did Not Evolve From Chimpanzee-like Apes 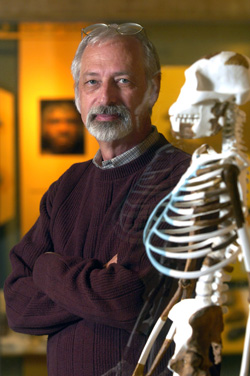 Dr. C. Owen Lovejoy, Kent State University professor of anthropology, stands next to the reconstructed skeleton of "Lucy," a near -complete fossil of a human ancestor that walked upright more than three million years ago. A team of researchers including Lovejoy today unveiled research findings of a skeleton older than "Lucy," nicknamed "Ardi."

KENT, Ohio – Oct. 1, 2009 – Throw out all those posters and books that depict a living ape evolving into a human being, says Kent State University Professor of Anthropology Dr. C. Owen Lovejoy. An internationally recognized biological anthropologist who specializes in the study of human origins, Lovejoy is one of the primary authors who revealed their research findings today on Ardipithecus ramidus, a hominid species that lived 4.4 million years ago in what is now Ethiopia.

"People often think we evolved from ancestors that look like apes, but no, apes in some ways evolved from ancestors that look like us," Lovejoy said. "It has been a popular idea to think humans are modified chimpanzees. From studying Ardipithecus ramidus, or 'Ardi,' we learn that we cannot understand or model human evolution from chimps and gorillas."

A special issue of Science (www.sciencemag.org) available Oct. 2 will feature 11 papers that are the first formal description of "Ardi," a partial female skeleton. Lovejoy was first author on five papers and contributed to an additional three. For the past seven years, he has been a part of a major international research effort studying "Ardi," serving as post-cranial anatomist and behavioral theorist.

One of Lovejoy's most recognized achievements is the reconstruction of the skeleton of "Lucy," a fossil of a human ancestor that walked upright more than three million years ago. "'Ardi' is one million years older than 'Lucy,' more informative than 'Lucy,' and 'Ardi' changes what we know about human evolution."

When comparing "Ardi" to "Lucy," Lovejoy said that working on "Ardi" was much more exciting and interesting. "She provides real answers," he said.

A resident of Kent, Ohio, Lovejoy has taught at Kent State for 40 years. He is a widely published author, with more than 100 articles in prestigious publications. He also holds the honor of being one of the Institute for Scientific Information's "Most Highly Cited" authors in social sciences. In 2007, he was elected to membership in the National Academy of Sciences (NAS) for excellence in original scientific research. Membership in the NAS is one of the highest honors given to a scientist in the United States.

A Discovery Channel special will air this month that will feature Lovejoy and Kent State. It premieres Oct. 11 at 9 p.m. Eastern Time. For more information on the special, visit http://dsc.discovery.com/tv/ardipithecus/ardipithecus.html?campaign=dsc-....