The show, titled “Into the Amazon” traces the 1914 journey of President Theodore Roosevelt and legendary Brazilian explorer Candido Mariano Da Silva Rondon into the heart of the South American rainforest to chart an unexplored tributary of the Amazon River.

The program is set to air at 9 p.m. Jan. 9 on WNEO/WAEO, Channel 45/49.  “Into the Amazon” was written, produced and directed by John Maggio and executive produced by Mark Samels. 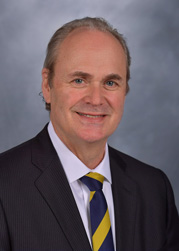 The filmmakers asked Dr. Diacon to participate because of his expertise on Brazilian history and in particular, Rondon, a ranking military officer. He wrote the 2004 book, “Stringing Together a Nation: Candido Rondon and the Making of Modern Brazil.”

The program has been in production for several years. The film crew visited campus two years ago and spent about three hours in the university museum taping an extensive interview with Dr. Diacon about Rondon.

Dr. Diacon said the filmmakers explained to him that there were plenty of experts on Roosevelt, but he was one of very few they could find to talk about Rondon.

Diacon said he sort of lost track of the project until he received an email telling him the program would air on Jan. 9.

The show includes actor Alec Baldwin as the voice of Teddy Roosevelt and Brazilian actor Wagner Moura as Rondon. Dr. Diacon said he is anxious to see the finished program to see if he can claim the famous actors as co-stars.

Dr. Diacon, in 1991, wrote a book on the Brazilian peasant rebellion that took place in the early 1900s – an uprising that lasted four years.  The process led him to consider the issues of the military and the difficulty of ruling such an enormous country with one central government at a time when there were no airplanes, internet, automobiles or even electricity.

His work then focused on Rondon, a heroic figure in Brazilian history, who created the country’s Indian Protection Service and who worked to lay telegraph lines along the Amazon River to connect the country.

On January 21, 1914, President Roosevelt, 55, and still getting over his failure to win a third term in office, set off on a joint American/Brazilian expedition to map a mysterious Amazon river tributary known as the River of Doubt. The party included Roosevelt’s 25-year-old son, Kermit.

Rondon led the jungle expedition and hired more than 140 Brazilians to make the trip, along with 110 mules and 70 oxen, to help to transport the Roosevelt party’s extensive cargo.

The trip was plagued by death, disease, insects and wild animals. Along the journey, a deep cut on the president’s leg became infected and he asked to be left behind to die, but Rondon and Roosevelt’s son refused to go on without him.

It took the party more than a month just to reach the River of Doubt, and two more months before they would paddle all 400 miles of the untamed waters, later renamed the Rio Roosevelt.

Many scenes for “Into the Amazon” were shot on location in the Brazilian Amazon on the Ariau River, which has many geographic similarities to the actual River of Doubt.  Additional scenes were shot in the Jarabocoa region of the Dominican Republic where the producers were able to find powerful rapids similar to those on the River of Doubt.

For his part in the program, Dr. Diacon said he hoped to convey that the expedition garnered attention because Roosevelt was a part of it; yet the adventure was nothing that Rondon and his men weren’t doing year-round in an effort to tame the jungle and unite Brazil.

Diacon said he hopes that his comments gave the program a Brazilian context.  “Rondon is a fascinating character,” he said.

“Into the Amazon” will be available on DVD and for online viewing at pbs.org following the Jan. 9 broadcast.