Put Your Money Where Your Heart Is: Of Football and Family

Ask Golden Flashes Head Football Coach Darell Hazell what the key to a championship team is and he’ll sum it up in one word: “Family. 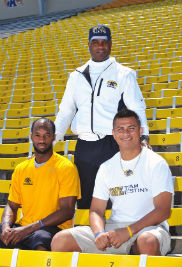 Ask Golden Flashes Head Football Coach Darell Hazell what the key to a championship team is and he’ll sum it up in one word: “Family.”  He is referring to the family of nearly 100 football players, each of whom understands his role on the team and why it is important.

“You can’t function as a team if you don’t establish a one-on-one relationship with each player,” says Hazell. “We spend time every day talking about specific principles and the realities of the world, just like other families do. We show them how to be better men first, and then teach them how to play football.”

The players are keenly appreciative of the family support system that Coach Hazell has built into the football program. And their gratitude extends to the financial support they have received from generous donors, the university and the Department of Intercollegiate Athletics.

Junior marketing major Freddie Cortez, a punter/kicker for the Golden Flashes, has a full-ride athletic scholarship to Kent State. Without it, he would not have been able to attend college. Cortez is the second of six children raised by a single mom in Ft. Meade, Fla. Everyone in the Cortez family had to work hard every day just to get by. College was not an option.

“It’s hard to explain in words how much my scholarship has meant to me,” says Cortez. “It’s given me the opportunity to get an education, the privilege of playing ball, and at the end of the day I don’t have to worry about my mom getting a bill in the mail. And when I get out of college, I can earn a living and not have to worry about any debt that I owe.”

Coach Hazell has made an impact on Cortez’s attitude and his life. “He’s taught me to be an overachiever. You have days when you want to settle for average, but to get better you have to do better,” says Cortez. “It’s been the same thing with my scholarship. I want it and so I work hard and take advantage of the opportunities it brings.”

Special teams running back Larry Dawson grew up on the north side of Akron in the Elizabethtown projects. Remembering his time there, he says no one expected anything from him. Raised by his mother and grandmother, Dawson ran track during his school days.

While Dawson was not a track superstar, his strong academic performance landed him a four-year scholarship to The University of Akron, where he joined the football team. After a coaching change left him the choice of playing linebacker or losing his funding, Dawson transferred to Kent State. Thanks to a scholarship from Coach Hazell, Dawson has continued his education for a fifth year and is able to play football while more carefully defining his career goals. He credits Coach Hazell with giving him the time and skills he needed to succeed. “I’ve learned three important life lessons from coach: consistency, dedication and passion.” Dawson adds, “I saw him get scholarship help for guys who really had no other financial options. Then, when my turn came, he came through for me. I really respect that.”

“A lot of these kids come from very low income families …  If it weren’t for their scholarships, who knows what they’d be doing? It gives them a chance to enrich their lives, and a lot of them go on to do great things because of it,” Hazell says.

His players credit Coach Hazell with creating an atmosphere in which team members check their egos at the door and always have each other’s backs. And, like most parents, Hazell keeps track of them — often through text messages and phone calls. “There’s a great saying that I keep on my wall — ‘They don’t care how much you know until they know how much you care.’ If you’re not the genuine item, your message will get lost.”

At Kent State, “The Last Dollar Scholarship” was created to provide support for athletes like Cortez and Dawson — students who wouldn’t be able to pursue their dreams without the financial assistance provided by scholarships. Please consider making a gift to support Kent State Athletics, The Last Dollar Fund on your campus, or one of literally hundreds of other giving options.

Click here to learn about other ways to put your money where your heart is.