Ring of Fire: The Music of Johnny Cash Coming to Kent State Tuscarawas 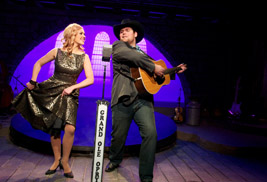 Stories of faith, family, passion, redemption and humor will set the stage ablaze in this new national tour of the Broadway Musical Ring of Fire: The Music of Johnny Cash on Sept. 24 at 7:30 p.m. at the Performing Arts Center at Kent State University at Tuscarawas.

Tickets for Ring of Fire: The Music of Johnny Cash range from $20-$33 and can be purchased now at the Performing Arts Center box office, online at www.tusc.kent.edu/pac or by calling 330-308-6400. The box office is open Monday through Friday, from 8 a.m. to 5 p.m.

Touching on the life and times of one of the world’s most legendary musical artists, Johnny Cash, the musical revue Ring of Fire is considered one of the best “jukebox musicals” of our time. Although Cash himself is never impersonated, Ring of Fire features a company of performers that will guide audiences on a journey through Cash’s storied life and celebrated music, from the cotton fields of Arkansas to the Grand Ole Opry. Ring of Fire features more than 31 of his hit songs from his long career, including I Walk the Line, Jackson, If I Were a Carpenter, I’ve Been Everywhere, Folsom Prison Blues, A Boy Named Sue, his final hit, Daddy Sang Bass and the title track Ring of Fire. With smashing medleys and bounce in its guitar-driven energy, this show will have audiences stompin’ their feet and asking for more.

Cash is primarily remembered as a country music artist, however his style spanned from gospel to folk, rock to blues, and country in between. This show has been bringing audiences to their feet at large and small theaters around the country. The New York Post calls it “Effective, funny and imaginatively presented.” “Ring of Fire is HOT!” declares Variety. “It’s touching and exuberant,” says the Associated Press.

Ring of Fire: The Music of Johnny Cash is created by Richard Maltby Jr. and conceived by William Meade with orchestrations by Steven Bishop and Jeff Lisenby. Ring of Fire was originally produced on Broadway by William Meade, CTM Productions, and James B. Freydberg.

In developing the creative vision for the show, Maltby and Meade felt that although they do not dramatize Johnny Cash’s life, it was important, by the end of the show that the audience felt that they have spent the evening in the presence of an extraordinary and real man. “Johnny wrote and sang about the lives we lead, regardless of where we lead them,” Maltby stated. “If, watching this show, you feel you are being drawn back to your roots, it’s not accidental. I hope, as we bring to life these wonderful songs, we will touch your heart, mind and soul as well, and take you back to part of your life you may want to return to.”

Free parking is available for all shows. The Performing Arts Center at Kent State Tuscarawas is located at 330 University Drive NE, New Philadelphia.