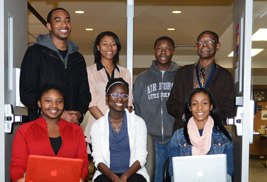 The National Association of Black Journalists (NABJ) is back at Kent State University and is quickly gaining new ground.

NABJ is the nation’s largest organization of journalists of color, with more than 3,000 members. NABJ awards nearly $100,000 in scholarships and internships each year to college and high school students nationwide, as well as fellowships for seasoned professionals.

Associate Professor Gene Shelton, NABJ Kent faculty advisor and diversity and globalization coordinator for the School of Journalism and Mass Communication, says that participating in the organization offers an essential learning opportunity for students interested in media careers.

“It’s frustrating to see students major in journalism and mass communication but not take advantage of student media opportunities. Too often, students of color tell me they don’t work for the Stater because they don’t feel welcome,” Shelton says. “These four years should be spent preparing yourself to work in media one day. Why would you wait until you graduate?”

NABJ provides workshops, networking and assistance for students who may have difficulty getting involved.

“NABJ offers opportunities for young journalists of color, and a place to make connections before entering the field,” Flynn says. “I want to create a sense of unity for black journalists on campus and for those who have an interest in the media, no matter who they are. I want students to know about scholarships and internships, specifically for black journalists.”

Flynn emphasizes that the organization is also about developing relationships across the nation.

“I want them to create connections with other NABJ members, as well,” she says.

NABJ Kent currently has 15 members, and there is potential for expansion.

“We’re off to a great start,” Shelton says. “There’s a lot of support out there for the group.”

Shelton says one reason for the group’s early success is Lori Cantor, the student media manager.

“She’s gone above and beyond to help our organization,” he says.

Cantor helped organize the “Welcome Back, NABJ” relaunch reception at the start of the fall semester to introduce student media to students who want to get involved. Student media hosted its first "Job and Involvement Fair" at Ritchie Hall in November.  Representatives from student media organizations spoke with students and accepted job applications for spring 2014.

“A strong NABJ chapter on campus will help to increase minority student involvement in student media, which will benefit both the students and this organization,” Cantor says.

“It’s easy to be indifferent. But diversity isn’t going to happen unless you make it happen,” Shelton says. “You have to want to be a school that is diverse in its student body and staff. A big step in the right direction is that student media leaders are now going out and recruiting a diverse staff.”

For more information about NABJ Kent, contact Cantor at lcantor@kent.edu.