Kent State University is beginning the second phase of the planned closure of the Allerton Apartment complex, taking Buildings E, F, J and K offline and preparing them for demolition 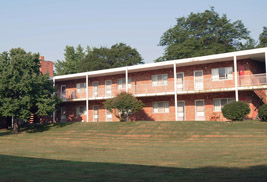 Kent State University is beginning the second phase of the planned closure of the Allerton Apartment complex, taking Buildings E, F, J and K offline and preparing them for demolition. The university announced the phased closure of Allerton Apartments in 2010 due to the buildings reaching the end of their life cycle. It is cost-prohibitive to maintain the buildings in the future.

Located on the southern edge of campus, the Allerton Apartment complex was constructed in two phases, completed in 1962 and 1966. Apartments in the complex are rented to upper-division students and Kent State students with families.

“We were able to accommodate all of those who lived in Buildings F, J and K and wanted to stay at Allerton by relocating them to Buildings A, B, C and D,” explains Betsy Joseph, Kent State’s director of Residence Services. “The rest of the affected residents either graduated or opted for other housing arrangements.

“The university worked with local social services agencies, including Habitat for Humanity, allowing them to go through the closed buildings and remove any items they wanted, like refrigerators and stoves,” Joseph adds.

With the amount of existing housing and the influx of new student housing options in the Kent community by private developers, Kent State’s Department of Residence Services determined that the Kent area has sufficient housing to accommodate the affected residents.

Buildings A, B, C and D will operate until July 2015. At that time, the remaining 69 apartments will be taken offline, and the buildings will eventually be demolished. The university does not have plans for the Allerton property at this time.

Meet the Kent State Class of 2026
What A Celebration! Homecoming Brings Golden Flashes Together
'Title IX not only changed my life, but literally saved my life'
Information
Mailing Address
P.O. Box 5190
Kent, OH 44242-0001