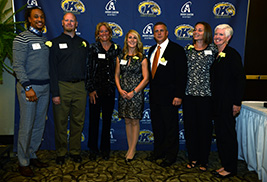 The Kent State Department of Intercollegiate Athletics inducted seven new members into the 2013 Varsity "K" Hall of Fame class as part of the 35th induction ceremony on Saturday, Oct. 26.

Bishko, came storming onto the softball scene, earning All-MAC First Team honors as a freshman. She broke the Flashes' single-season record for strikeouts in 1996 on her way to another all-conference season. The Loudonville, Ohio, native was a two-time Academic All-American, earning a first team nod in 1996. She received the Janet Bachna Award in 1997, recognizing Kent State's senior women's student-athlete who demonstrated combined qualities of leadership, athletic ability and academic performance. Bishko also served as a pitching coach for Kent State.

Field Hockey's starting goalkeeper for three seasons, Beck posted a program-record 26 shutouts, leading the Golden Flashes to MAC regular season and tournament titles in both 1991 and 1992. She claimed All-MAC First Team honors in both 1991 and 1992, while earning all-region accolades. In 1991, Beck carried a 0.26 goals against average as the Flashes finished 18-1-2. Her 40 career wins are the third most in school history and her 18 wins in 1991 are the most in a season.

A native of Washington, D.C., Burriss was the 33rd overall pick of the 2006 MLB Draft and spent parts of five seasons in the major leagues, including a pair of World Series runs by the Giants. In 2006, he was named Mid-American Conference Player of the Year and earned All-America honors from both Baseball America and the American Baseball Coaches Association. Kent State's leadoff hitter in 2006, Burriss hit .360 with 17 extra-base hits, leading the Golden Flashes to a MAC regular season title. He also helped the Flashes to a conference tournament title in 2004. Burriss holds Kent State records for stolen bases in a career (92) and a season (42).

The MAC discus champion for four straight seasons, Fanger's throw in 2000 (194-3) is still the longest in Kent State's history. He was also a two-time place winner at the MAC Indoor Championships in the weight throw and a two-time place winner at the MAC Outdoor Championships in the hammer. A native of Kalispell, Mont., Fanger's efforts in the discus and hammer helped the Golden Flashes win a MAC outdoor title in 2000. He was a two-time qualifier for the NCAA Championships and earned Academic All-MAC First Team honors in three straight seasons. He has also served as assistant track and field coach for 12 years, guiding Kent State's throwers to more than 40 MAC championships.

Langham still holds Kent State's highest finish in the all-around at the NCAA Championships, a 14th place in 2002, earning second team All-America honors. The Concord, Ohio, native helped the Golden Flashes to a 2001 MAC Championship by finishing second on the floor, third on bars and seventh on vault. Langham won an individual MAC title in 2000 on bars. That season, she finished second at the MAC Championships in the all-around, earning All-MAC First Team honors. Langham claimed a spot on the all-conference second team as a freshman and earned Academic All-MAC accolades twice.

Serving Kent State Intercollegiate Athletics for 22 years, O'Donnell began her time in the department as an academic counselor. She later became senior woman administrator and executive associate athletic director. O'Donnell guided student-athletes in academic, social and real-life endeavors. Meanwhile, she played a major administrative role in the department as numerous teams achieved new levels of athletic and academic success. An indicative reflection of O'Donnell's work with Laing Kennedy came during the 2009-10 academic year when Kent State won the Reese, Jacoby and Cartwright Awards for excellence in athletics, academics and community service.

Viggiano averaged over a goal per game throughout his four seasons of playing ice hockey and was the first four-year varsity letter winner in the program's history. He holds Kent State's career records for goals scored (97), total points (203) and hat tricks (9). Viggiano ranks second in career assists (106) and game-winning goals (9). He also served as an assistant coach and head coach for the Golden Flashes from 1986-88.

This year's group of seven inductees brings the membership of the Varsity "K" Athletics Hall of Fame to 284 since the original 13-member charter class of 1979. The induction ceremony took place at the Kent State University Hotel and Conference Center. The 2013 class was introduced on Oct. 26 at halftime of the football game against Buffalo.