Spring 2013 commencement ceremonies for Kent State University are scheduled for Friday, May 10, and Saturday, May 11.

Spring 2013 commencement ceremonies for Kent State University are scheduled for Friday, May 10, and Saturday, May 11. All of the Kent Campus commencement ceremonies take place at the Memorial Athletic and Convocation Center (MAC Center). Across the university’s eight-campus system, more than 4,450 students will graduate from Kent State this spring. 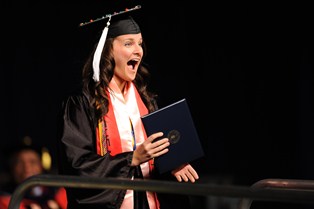 The advanced degree ceremony for those receiving Ph.D. and master’s degrees occurs May 10 at 6 p.m. The speaker is Rebecca O. Bagley, president and CEO of NorTech, a technology-based economic development organization working to revitalize Northeast Ohio by accelerating the growth of regional innovation clusters in advanced energy, flexible electronics and water technologies. Under her leadership, NorTech connects small, medium and large companies and universities for business, funding and research opportunities that create jobs, attract capital and have long-term, positive economic impact. She is a contributing writer for Forbes.com, where she writes about transforming regional economies and the need for regions to innovate, collaborate, compete, grow and succeed.

The 9 a.m. ceremony will include majors from the College of the Arts; the College of Arts and Sciences; and the College of Public Health. At that ceremony, the speaker is Kent State alumnus Jeff Richmond, a writer and composer who has been working in show business for three decades. Most recently, he worked on the NBC comedy series “30 Rock,” which starred his wife, Tina Fey. While with “30 Rock,” he was nominated for several awards for the show’s music and won three Emmys and a Peabody as one of the show’s executive producers. Prior to that, Richmond was musical director and songwriter for “Saturday Night Live.” He also worked at ImprovOlympic Theater and Second City in Chicago. He retired in 2013 and lives in New York City.

The 1 p.m. ceremony will include majors from the College of Applied Engineering, Sustainability and Technology; the College of Business Administration; the College of Nursing; and the School of Digital Sciences. The commencement speaker is Jeff Hoffman, founder and CEO of Priceline.com. Hoffman is a serial entrepreneur and internationally recognized innovator who has been a founder and CEO in a number of startups and high-growth companies, including Priceline.com, uBid.com and ColorJar. He writes a regular column on innovation and entrepreneurship for Inc. Magazine and works with the White House, the Executive Office of the President, the U.S. State Department and the U.S. Department of Commerce to support business and economic growth initiatives all over the world. Hoffman also works with universities globally to support entrepreneurship, including serving as a mentor for Kent State’s Blackstone LaunchPad, the Stanford University Venture Lab, MIT’s Enterprise Forum and the University of Chicago’s New Venture Challenge.

The last ceremony of the day at 4:15 p.m. includes majors from the College of Architecture and Environmental Design; College of Communication and Information; and the College of Education, Health and Human Services. The speaker at that ceremony is Kent State alumnus Larry Armstrong, CEO of Ware Malcomb, a leading national design firm that provides planning, architectural, interior design, graphic design and civil engineering services to commercial real estate and corporate clients throughout the world. Armstrong’s firm is based in Irvine, Calif., and has 12 offices throughout the United States and in Toronto, Canada, and Panama City, Panama. Armstrong is both an accomplished architect and strong business leader. He is involved in many professional and non-profit organizations. He currently serves as chair of the Kent State University Foundation.

The commencement ceremonies may be viewed live at www.kent.edu/commencement/webcast/live-webcast.cfm.