Students Team with Researchers to Uncover the Invisible 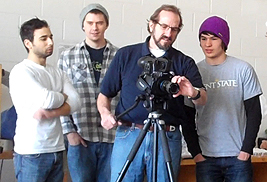 With a grant from the Herbert W. Hoover Foundation, Kent State University at Stark students have set out to find what exactly is contaminating the Nimishillen Creek watershed. This project, called “Making the Invisible Visible: Water Quality in Stark County,” is led by Kent State Stark with participation from Walsh University, Malone University, Stark State College and the University of Mount Union.

Last year, three faculty members from the School of Journalism and Mass Communication and two Kent State Stark biology faculty members launched an Environmental Media course that combined filmmaking, online communication and the science of watersheds. Preparations and course design began in the summer and fall of 2010. At that time, Ali Habashi of the University of Miami’s Arnold Center for Confluent Media shared a similar course he taught and helped with the planning. The course has now run twice – in spring 2011 and spring 2012 with plans for spring 2013.

Mitch McKenney, assistant professor with the School of Journalism and Mass Communication at Kent State Stark, cites the main goal of the environmental media course as “looking to introduce the students to issues in the watershed and then showing them how to share that story with the community.” At the beginning of the class, biology faculty provided the students with a good grounding in the issues.

Following that, the journalism faculty gave the students the tools and knowledge to execute the technical aspect of sharing their story. McKenney masterfully coordinated aspects of the course, such as planning course meetings and field trips, lining up community partners and arranging for public showings of the completed films.

Students produced a number of videos in the environmental media course that can be seen on the project’s website,www.ourwaterwebs.org. In addition, the site will also be home to student documentary pieces from the current water sampling project. Habashi, along with Colton Hoover Chase, are filming a documentary about this project, focusing on the work of the students and professors.

Three students from the Environmental Media course are working with the current sampling project, which is in coordination with the Ohio Environmental Protection Agency and other organizations. They are producing short videos from each of the stages of the project. McKenney said these students are responsible for “telling the story of what’s going on with the water.” Like the title of the project, these media students are helping to make the invisible visible. “Too often, we do great research that nobody sees,” McKenney says.

Students involved in the course and project say their greatest takeaway was being able to talk to real people in the community about real problems. They loved knowing that doing something creative could have such an impact. Derek Wholihan, sophomore electronic media production major, says he “took away a whole new appreciation of the environment” after taking the environmental media course.

Wholihan is currently following the students and researchers during the project and filming their reactions. He is then taking the footage and creating videos to go on the website. Wholihan believes it is important to have knowledge about the project in order to accurately document it. “I have also jumped right in the water and got my hands and feet dirty to work right alongside the students and researchers,” he says.

For more information or to view student-made videos, visit the website at www.ourwaterwebs.org.