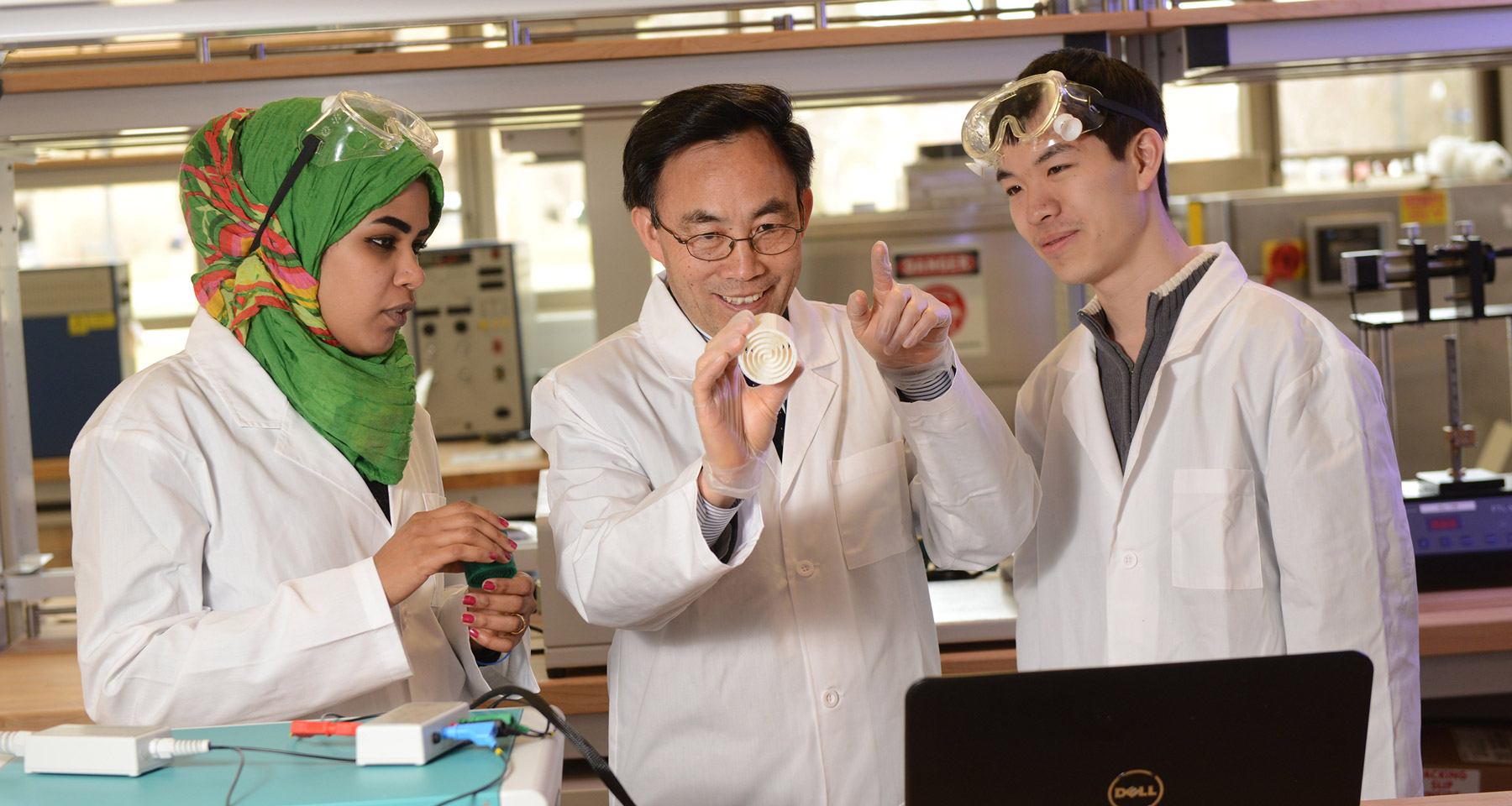 The Future of Fuel Cells

The basic concept of a fuel cell is simple – it converts chemical energy into electricity.

To hear Kent State University Assistant Professor Yanhai Du, Ph.D., in the College of Applied Engineering, Sustainability and Technology tell it, however, the impact of modern and emerging fuel cell technology is anything but basic.

Fuel cells have the potential to deliver on the promise of the elusive cold-fusion theory of the 1990s – clean, super-efficient, affordable energy that could reduce carbon emissions exponentially.

“We have 7.2 billion people in the world, and it’s growing,” Du said. “The more people you have, the more energy you need. What we rely on now is 80 percent fossil fuels.”

He said American energy consumption includes 45 percent electric energy, and 70 percent of that electricity is generated from fossil fuels, like coal, while 18 percent is nuclear.

Only 12 percent of American energy comes from renewable sources, he said – mostly hydraulic power, with small contributions from wind (3.5 percent) and solar (0.5 percent).

The problem with changing energy sources, Du said, especially when moving away from raw materials that fundamentally produce heat energy, is that it reduces efficiency.

For that reason, Du’s work at Kent State aims to create even more efficient fuel cell technology focusing on fuel cells fed with natural gas, coal gas, biogas, propane or jet fuel, as opposed to hydrogen – a fuel source for many fuel cell models. Hydrogen gas is not a natural resource like fossil fuels, and the process to make it costs money and consumes energy, Du said.

Du was among an elite few in the field to pioneer microtubular fuel cell development, and in the early 2000s was the first to bring microtubular solid oxide fuel technology from the lab into mass production.

Du also invented the “spiral cell” fuel cell that can potentially produce as much as 5-10 times more power than regular tubular fuel cells. This technology has been patented in the United States and internationally.

“Kent State wants to educate our community so they know there is such a technology that will allow us to use fossil fuels as well as renewable fuels to generate electricity to meet our demand while greatly cutting down carbon emissions,” Du said.

The technology is even more promising when paired with basic energy sources that are already clean, like solar or wind power.

“A fuel cell is a magic box,” Du said. “If the energy can come from a renewable source like solar, we can greatly improve our potential to reduce our carbon emissions.”

With fuel cell technology an area of international research focus, and Ohio named consistently on recent annual lists of the U.S. Department of Energy’s “Top 5 Fuel Cell States” – along with California, Connecticut, New York and South Carolina – Du’s work may soon put Kent State at the forefront of a critical technology field.

“We need to contribute to research, investment and workforce training in this area – not so much for my own career, but because I want for them, in 5-10 years, when they think about fuel cell technology, to say ‘Kent State,’” he said.

Du also isn’t just studying fuel cell design, either. He wants to cross over into the manufacturing end of it as well, especially additive manufacturing, in which America Makes, based in Youngstown, Ohio, is a national leader.

Du’s long-term goal is to add an additives manufacturing major to Kent State curriculum. Creating that could lead to cross-disciplinary studies and research, he said, even suggesting that local companies that specialize in the fields might be interested in sponsoring the programs to help prepare a new generation of well-trained workers.

“If we could marry these two, that would be pretty cool,” he said.