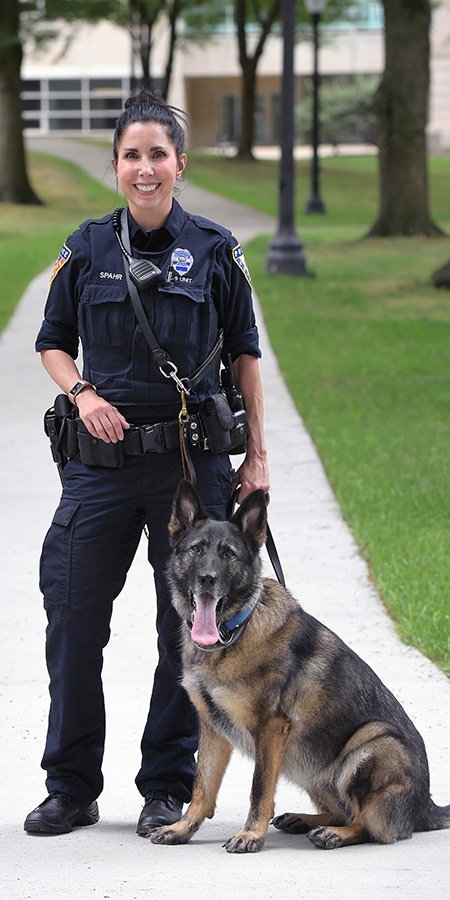 “She is very high spirited, very high energy and very smart,” Officer Spahr said. “She is a phenomenal work dog, very focused and thorough, but quick. I have to stay on my toes to keep up with her.”

Coco was the first police dog at Kent State. She is now one of two police dogs at the university, later joined by a Belgian Malinois named Dexter. Dexter's handler is Officer Miguel Witt.

“I am very proud of Coco and Dexter and their handlers Officer Spahr and Officer Witt,” said Dean Tondiglia, director of public safety and chief of police at Kent State. “They are very well trained, respected and recognized in the area as leading explosive detection teams.”

Officer Spahr said she bonded quickly with Coco when the first K-9 unit started at the university in 2013.

“I felt this instant connection with her, an instant bond,” Officer Spahr said. “And then, when I realized how good of a worker she is, we just started really coming into our own.”

Officer Spahr said her relationship with Coco has grown over the past five years as the pair evolved as a team.

“I realized over the course of the years that we’ve worked together how much she trusts me,” Officer Spahr said. “I’ve put her in some situations that are really challenging. We’ve done helicopter flights together, we’ve been rappelling together, we’ve been pulled up into bridge hatches by ropes and we’ve responded to bomb threats.”

As an explosives detection K-9 unit, the team responds to cases all over the state of Ohio and works closely with the FBI and the Bureau of Alcohol, Tobacco, Firearms and Explosives for training purposes.

“We’ve done a ton of political rallies, we worked very closely with the Secret Service as well as doing things out in the community,” Officer Spahr said. “Obviously, Kent State is our main priority. When we have sporting events or concerts – really any large event where it draws a number of people – we’re typically working behind the scenes to make sure everyone is safe.”

“I have received a lot of positive feedback about the impact Coco and Officer Spahr have had on our police and community relations,” Chief Tondiglia said. “Our K-9 team certainly contributes to the overall success of our department.”

Officer Spahr also said she learned a lot about herself from working with Coco.

“It’s an interesting exercise putting your trust and faith into someone other than yourself,” she said. “Police work is often like that, and I really trust the men and women in this department. But putting a lot of trust and faith in an animal is an eye-opener.”

But the trust between Officer Spahr and Coco is a long-term mutual alliance.

“The bond between a handler and their dog is different than any relationship that you can imagine,” Officer Spahr said. “I spend more time with her than I do anyone else on this earth. It’s more than owning a pet. It’s something beyond that. It’s a true partnership.”

Look Back at the First Kent State Police K-9 Unit