Kent State Ranks as One of the Best National Universities by U.S. News & World Report 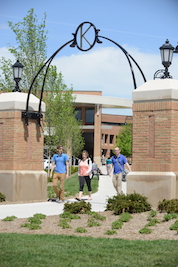 “Today we released our fall enrollment numbers, and at our Kent Campus we enrolled our largest and academically best-qualified freshman class ever, drawn from a record 21,700 applicants,” said Todd Diacon, Kent State’s senior vice president for academic affairs and provost, on Sept. 10 when the rankings were announced. “And now Kent State is in the first tier of U.S. News’ list of the Best National Universities, and is the only public university in Northeast Ohio to achieve this distinction. We are truly having a great start to this fall semester."

The 2014 rankings are posted online at www.usnews.com/colleges. They also will appear in the print edition of the “Best Colleges 2014” guidebook that can be purchased online or on newsstands Sept. 24. Kent State’s ranking is 201, tied with five other schools out of nearly 1,800 schools.

In addition to its inclusion on the Best National Universities list, U.S. News & World Report also placed Kent State on the following rankings: