Kent State hospitality management student Ashley Foster add salt to a dish she is preparing in the kitchen at Beall Hall.

Kent State University senior Ashley Foster has known since third grade that she wanted a career as a chef. 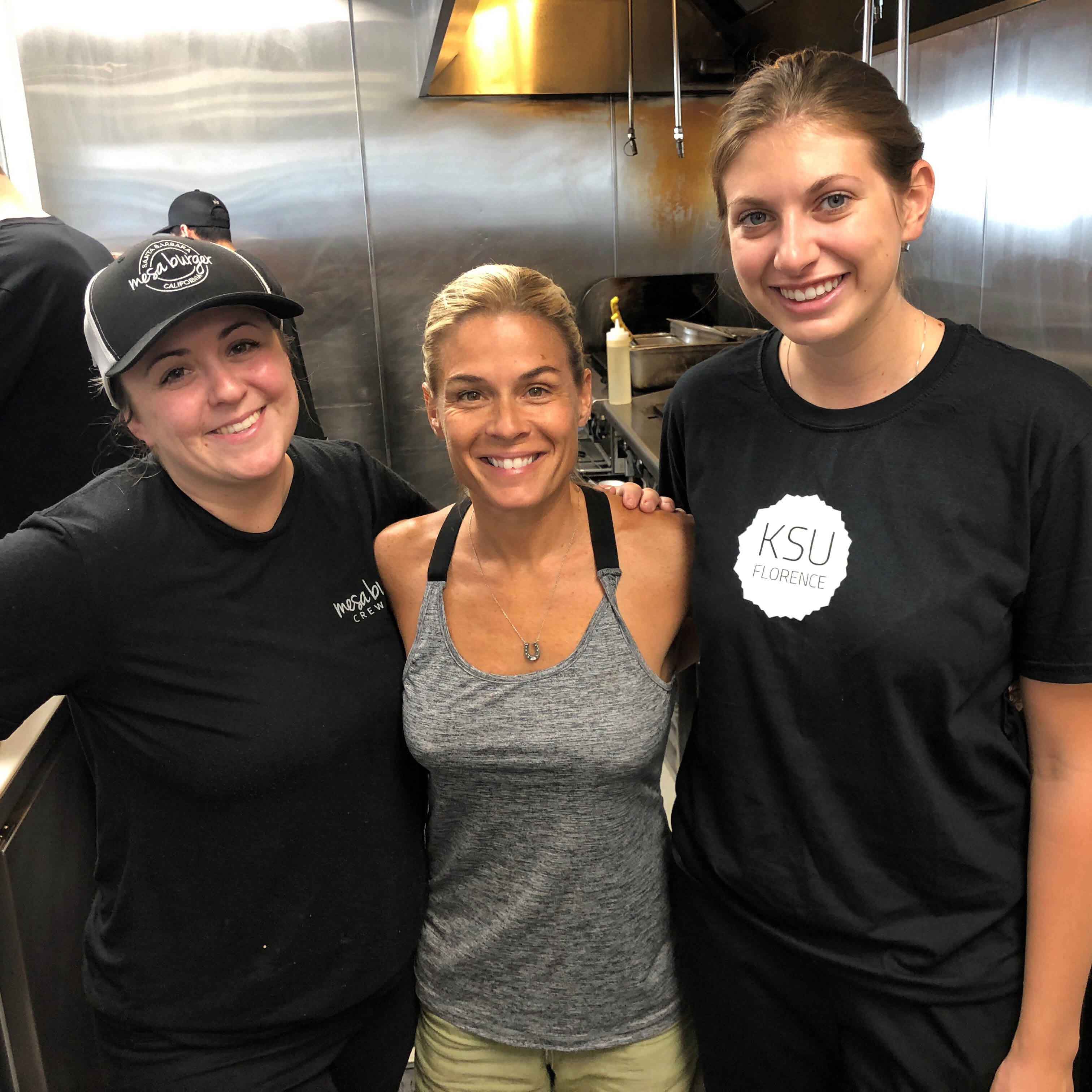 The 20-year-old hospitality management major got a little closer to her dream over the summer when she spent a week training with celebrity chef Cat Cora at the chef’s headquarters in Santa Barbara, California.

Since she was a youngster, Ms. Foster has been a fan of Chef Cora. She watched her on television, where Chef Cora is known for becoming the first female Iron Chef on the Food Network show "Iron Chef America."

As president of the Kent State student chapter of the Club Management Association of America, Ms. Foster, along with other Kent State students, attended the association’s national conference in San Francisco in March. Chef Cora was a featured speaker there.

Ms. Foster, on her first day at the conference, sought out the head of the association and asked him how she could arrange to meet the celebrity chef. He offered to help, and on the day of the speech, he advised Ms. Foster where to wait, hopefully, to catch Ms. Cora as she was leaving the event.

“I almost missed her,” Ms. Foster said, explaining Chef Cora’s diminutive stature. Ms. Foster luckily saw the frame of the chef’s glasses and approached her, asking if she could walk her out and ask her some questions.

The chef was with her wife, Nicole Ehrlich, who is CEO of Cat Cora Inc., and both were happy to stop, talk and answer Ms. Foster’s questions about working as a chef. She later posed for a photo with Ms. Foster, who passed on her business card to Chef Cora before they parted ways.

Ms. Foster said she received an email from Chef Cora within an hour of them parting ways. The chef told her to reach out to them if she was ever interested in an internship or serving as a stagiaire, the French culinary term for a chef trainee.

After emailing back and forth for several months, Ms. Foster eventually asked Chef Cora if she could serve a stagiaire with her company and she agreed.

“I assumed I would be going to the restaurant and not even be with Cat and Nicole,” Ms. Foster said.

The pair asked her where she would be staying during the training, and when she replied an Airbnb rental, they objected and instead invited Ms. Foster to spend the week at their Santa Barbara home.

The internship from July 23-28 was a busy week, with Ms. Foster shadowing Chef Cora and Ms. Ehrlich at business meetings and spending time at Chef Cora’s restaurant, Mesa Burger, working with the restaurant’s executive chef and general manager to learn both front-of-the-house and kitchen operations.

Ms. Foster said she was impressed with the way the pair run the Cat Cora empire, and she learned as much about business and management as she did cooking. She said she also learned the importance of being an effective communicator and saw what significance the pair placed on communicating well with their staff and one another.

Ms. Foster cooked along with Chef Cora at home, one day preparing lunch of a cinnamon chicken stew and traditional Greek salad.

“The cinnamon chicken stew was her mom’s recipe,” Ms. Foster said. “I made it for my parents and grandma. They really liked it.”

Reflecting on the "Amazing" Experience

Ms. Foster sums up her time with Chef Cora in one word: amazing.

The chef’s thoughts on Ms. Foster are no less flattering.

“Ashley is fantastic!” Chef Cora said. “She goes above-and-beyond her duties, always asking `What else can I do?’ I would hire her tomorrow if she were done with school.”

Chef Cora said she selected Ms. Foster for the training because she personally reached out to her. She said she was impressed by how Ms. Foster has goals and a set career path and has spent time and money learning all she can about her future career. Her drive, Chef Cora said, reminded her of herself when she was starting her career.

“I was happy to mentor someone so driven and passionate about the food industry,” Chef Cora said. “Ashley’s mindset reminds me of how I approached the kitchens when I pursued an internship in France. Sometimes you have to be persistent and clear about what you want.”

Inspiring the Chef to Create an Internship Program

Her experience with Ms. Foster was so positive that Chef Cora intends to offer the weeklong training to a budding chef every year.

“I will be offering this internship annually to one lucky student pursuing a career in the food industry,” Chef Cora said. “They will be boarded with us and our family, just as Ashley was, and work front and back of house at one of my restaurants, be emerged in my corporations, cook with me and plus much more.

“Did you know she also met Alice Waters this summer?” he said.

Chef Waters is an author, activist and a leader in the sustainable/local foods movement in the United States. She is founder and owner of the acclaimed Chez Panisse, the Berkley, California, restaurant known for its organic, locally grown ingredients. Ms. Foster said when she made a reservation to eat at the restaurant, she asked if she could meet Chef Waters, and the restaurant staff made it happen.

“She is an A student,” Mr. Hamilton said. “She shows up every day, and she tries really hard. There is no hole in her game. She is a natural leader, and she leads a lot by example. She is beyond driven.”

Mr. Hamilton noted how involved Ms. Foster is outside of the classroom.

“She moves with a purpose,” he said. “She has such a clear vision of what she wants to be.”

Aside from her role as president of the Kent State student chapter of the Club Management Association of America, Ms. Foster was one of the founding members of the Sigma Delta Tau social sorority and founded the student food club Chefology for students interested in food and learning more about food and cooking.

Ms. Foster expects to graduate from Kent State in May 2019, after just three years. She graduated in 2016 from Salem High School, where she earned 15 credits at Kent State’s Salem Campus while still in high school.

While she had thought about attending culinary school, Ms. Foster said her parents encouraged her to attend a traditional university first to earn a bachelor’s degree, in case she should want to pursue a career other than chef.

She said selecting Kent State was an easy choice. Not only are her father and sister alumni, but Kent State’s Hospitality Management program also is the only one in Ohio accredited by the Accreditation Commission for Programs in Hospitality Administration.

After graduation in May, Ms. Foster has been accepted to attend the prestigious Culinary Institute of America (CIA) cooking school in Hyde Park, New York, in September 2019. Ms. Foster said Mr. Hamilton is a CIA graduate, and she hopes to follow in his footsteps.

Mr. Hamilton said he expects Ms. Foster will do better than that.

“I’m pretty sure she is going to exceed my footsteps,” he said.