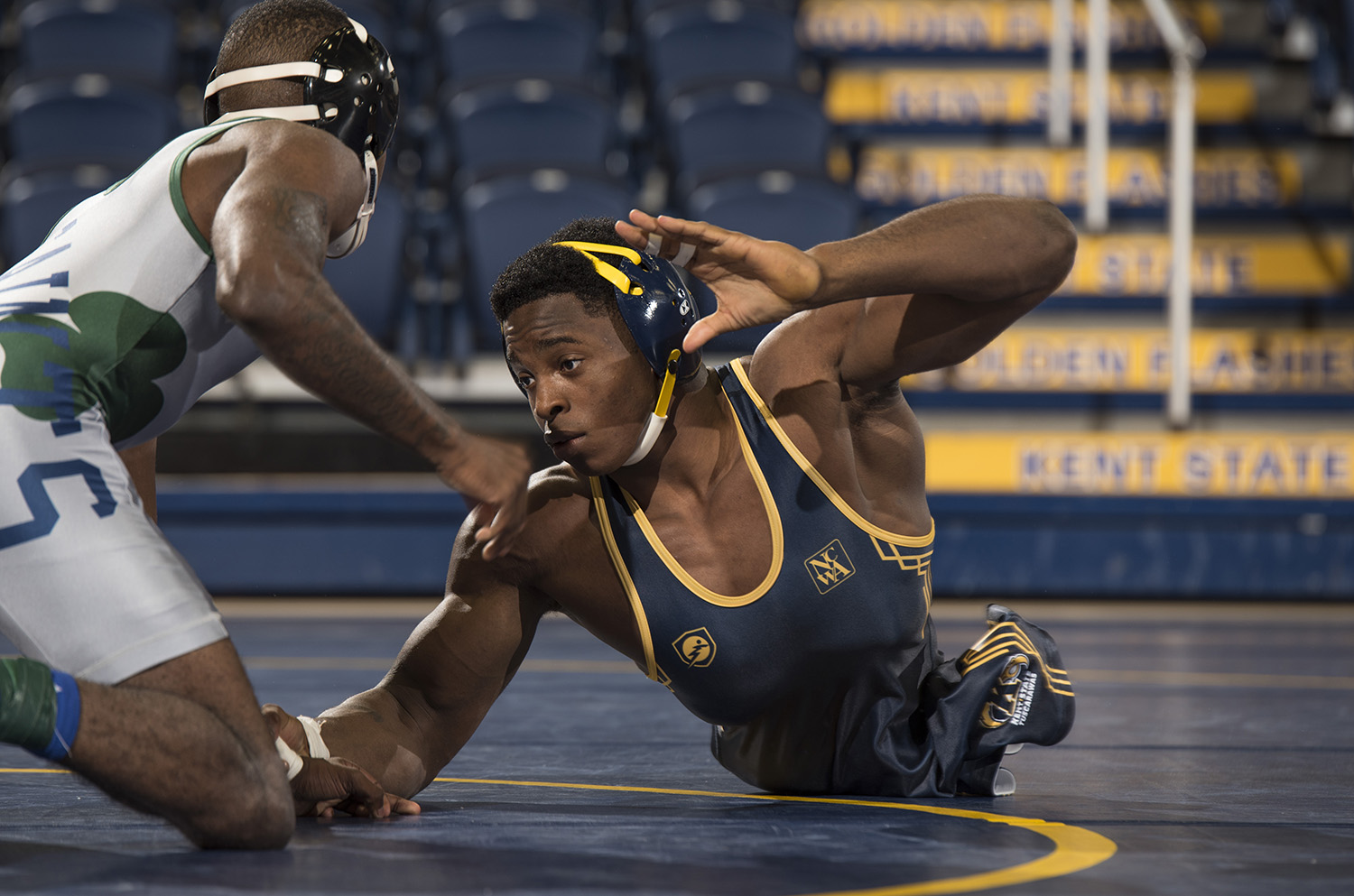 No excuses. Zion Clark lives by these two words. Born without legs, the Kent State University at Tuscarawas Golden Eagles wrestling phenomenon overcomes obstacles and gladly accepts challenges both on and off the mat every day with a contagious smile.

“The obstacles I face in wrestling prepare me for everyday life,” Mr. Clark said. “Wrestling teaches me patience and persistence.”

The 19-year-old was born in Columbus, Ohio, with a condition known as caudal regression syndrome that impairs development of the lower half of the body. Given up for adoption as a baby, Mr. Clark was bounced around from foster home to foster home. “It was not the ideal situation,” he said. But he persevered and wrestling became a life support.

“Wrestling opened a door for me when I was seven years old,” Mr. Clark explained. “I remember that day like it was yesterday,” referring to the day he moved from an elementary school in North Canton to Massillon and was first introduced to the sport of wrestling. While he admits he didn't know what he was doing when it came to wrestling, he decided to give it a try.

“They just said go grab his legs and try to take him down – there’s no technique,” Mr. Clark said. “I thought it was the most fun thing in the world!”

He felt he had an upper hand against his young competitors since he walked on his hands and had greater arm strength.

Mr. Clark continued to wrestle at Massillon Washington High School, where as a freshman and sophomore, he had no wins. As a junior, the tide began to turn and he started to win a few matches. By the end of his junior year, something just clicked.

“I started thinking about college, and I started training six to seven days a week,” he said. “I worked with a lot of great people, and I just kept winning.”

“People started to recognize my name and that I was a force to reckon with,” he said.

At the end of his high school career, he compiled an outstanding 33-15 record at Massillon. During this time, another hurdle was overcome, as Mr. Clark’s adoption by his mom, Kimberly Hawkins, was finalized.

For advice and guidance, Mr. Clark does not hesitate to reach out to family and friends.

“Obviously, my mom is the number one person I go to,” he said. “When I know I need help, I ask for help.”

Mr. Clark credits his high school coach, Gil Donahue, with his success as a wrestler.

“He pushed me to the point past exhaustion,” he explained. “And when I had mental breakdowns, he just talked me up, really got me going.”

“They don’t sugarcoat anything,” he said. “Wrestling is a cut-throat sport.”

The key to his success? Persistence and trial and error. And, of course, no excuses.

Mr. Clark explained the importance of the phrase no excuses, which is largely tattooed across his back. During his senior year, he was mismatched against an opponent who took fourth place in the state. In their match, Mr. Clark’s opponent jumped over him and collided with his head.

“I took a hard hit to the face," he explained. "My nose was bleeding, my eye was cut. I had to be taped up to keep going. I said to my coach, ‘I can’t do this.’ Coach Donahue said, ‘You made it this far, you have to keep doing your job. Don’t give me any excuses.’

“I went back on the mat, and when he jumped over me again, I caught him in midair and put him down on the mat,” Mr. Clark said. He went on to win the match – one of the most memorable of his high school career.

Mr. Clark’s love of wrestling inspired him to further his education and attend college. He is a freshman at Kent State Tuscarawas in New Philadelphia.

“Wrestling in college – I just set my mind on that,” he said.

“I look forward to going to my classes – it feels like home,” he said.

“We are very happy to have Zion here, both as a student and an athlete,” said Bradley Bielski, Ph.D., dean and chief administrative officer of Kent State Tuscarawas. “His determination and perseverance are inspirational.”

As a Golden Eagle, Mr. Clark is currently ranked eighth in the National Collegiate Wrestling Association at 125 lbs. One of his goals is to become a national wrestling champion, which he hopes to accomplish either this year or next year.

“Zion is one of the most coachable wrestlers I have ever coached,” said Golden Eagles wrestling coach Dave Schlarb. “He has a can-do attitude that never waivers. He is a remarkable team player that is willing to do anything needed to help the team succeed.”

Coach Schlarb described Mr. Clark as a team motivator who always wears a smile and never says “I can’t.”

Mr. Clark’s aspirations aren't confined to the classroom, the wrestling mat and a national championship. He also has his sights set on Olympic gold.

While supporting his sister, Indy, at the state track meet in Columbus where she won the long jump state title, the chair for the Paralympics approached Mr. Clark and encouraged him to try wheelchair racing. This past July, he qualified to be a member of the track team of the Paralympic Nationals at UCLA in California, where he successfully raced with elite athletes from around the world.

Using a specially designed three-wheeled chair operated solely by arm and upper body strength, Mr. Clark is incredibly fast around the track, reaching speeds of up to 20 miles per hour.

“The chair was difficult to master,” Mr. Clark explained.  “I tried to quit, but my coach came and talked to me, and I got my head on my shoulders.”

Then something just clicked – again. He exploded on the race track and became the fastest racer in the state. In 2016, he won two state titles – 100 meters and 400 meters – and he placed 3rd in the 800 meter and 3rd in the shot put.

Mr. Clark may know this summer if he has been selected as a member of Team USA.

In the meantime, he’s working hard, training daily and becoming even stronger. His determination is evident.

“I want to be an Olympic gold medalist – I want the gold,” he said.

When asked what advice he might give others who are facing obstacles in their lives, Mr. Clark was quick to offer words of wisdom.

He pointed out the advantages of facing and overcoming challenges.

“You want to be happy you have a challenge,” he said. “Things shouldn't always be easy.”

Mr. Clark explained that everyone needs to be challenged.

“I like the satisfaction of knowing I work hard,” he said.

To overcome daily obstacles, Mr. Clark also suggested: Keep it simple, just have fun, work hard and be happy. And of course, make no excuses.