Kent State sophomore Gisli Sveinsbergsson, who was named the 2017 MAC Individual Champion, prepares for a putt.

Kent State also took individual medalist honors, with Gisli Sveinsbergsson finishing first overall. Over four rounds, the sophomore finished at 8-under par 280, coming from behind to beat Miami’s Patrick Flavin by two strokes. Sveinbergsson finished the weekend with a 71, his fourth straight round under par. 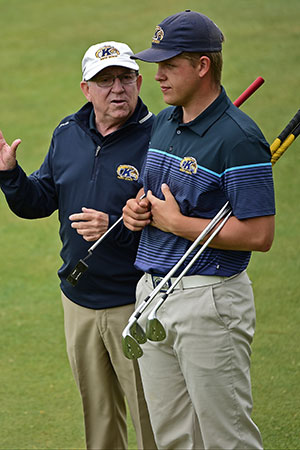 After the tournament, Kent State was honored with several awards from the MAC. The Golden Flashes had all five of the golfers in their lineup named to the All-MAC First Team, while Sveinbergsson and Ian Holt were named to the All-Tournament Team. Holt claimed MAC Golfer of the Year honors, while coach Page was named Coach of the Year.

“I couldn’t be more proud of these guys,” Page said. “Give Ball State credit for competing with us all weekend. It is really hard playing as the prohibitive favorite. These guys deserve every honor they were given today. All five guys in the lineup were on the first team, which has never been done before. And as I said at the ceremony, I have to share Coach of the Year honors with associate head coach Jon Mills.”

Holt earned All-Tournament team honors for finishing tied for fourth overall. The MAC’s top golfer had his best round of the tournament on the final day at 68, putting his final score at 1-under par 287. Also in the top 10, last year’s MAC Golfer of the Year Chase Johnson finished tied for seventh. Johnson shot a 1-over par 289 for the weekend. On the last day of the tournament, Johnson was 2-over par with a 74.

Bjarki Petursson and Josh Whalen each shot a 76 on the final day of the tournament to wrap up the lineup. Petursson finished tied for 19th at 12-over par 300, while senior Whalen finished at 13-over par 301 in a tie for 23rd.

Kent State will take the next two weeks to train for the NCAA Regional Tournament, set for May 15-17 with six possible locations. The Kent State Golden Flashes will find out the seed and destination during the selection show, airing on the Golf Channel on May 4 at noon.