For Lisa Strom, the fall start to the women’s golf season for Kent State and her Golden Flashes was such a successful whirlwind that her July 1 hiring as head coach and Kent State’s dominating 58-1 fall tournament start with three first-place finishes and a second are still somewhat of a blur.

“It was one of those things were I had no plans to leave Texas State,’’ Strom, the former LPGA professional, said. “I was happy, building something pretty good there. But I got the phone call from here and the next two weeks were a whirlwind, getting up here for the interview and getting all that done. Then all-of-a-sudden getting the offer, then all-of-a-sudden starting July 1st.’’

And that’s just the short version.

“I had been in Thailand (recruiting) when I got the phone call,’’ she said. “Then, before I knew it, I was up here for the interview. It is an ideal situation since it got me closer to my mom. I’m only about six hours from her (North Wales, Pa.). I was born in South Dakota, lived in North and South Dakota, Maryland, Indiana, so we moved around a little bit as a family. Moving was no big deal for me, not that big of a hassle. You do get to be a professional at some things.” 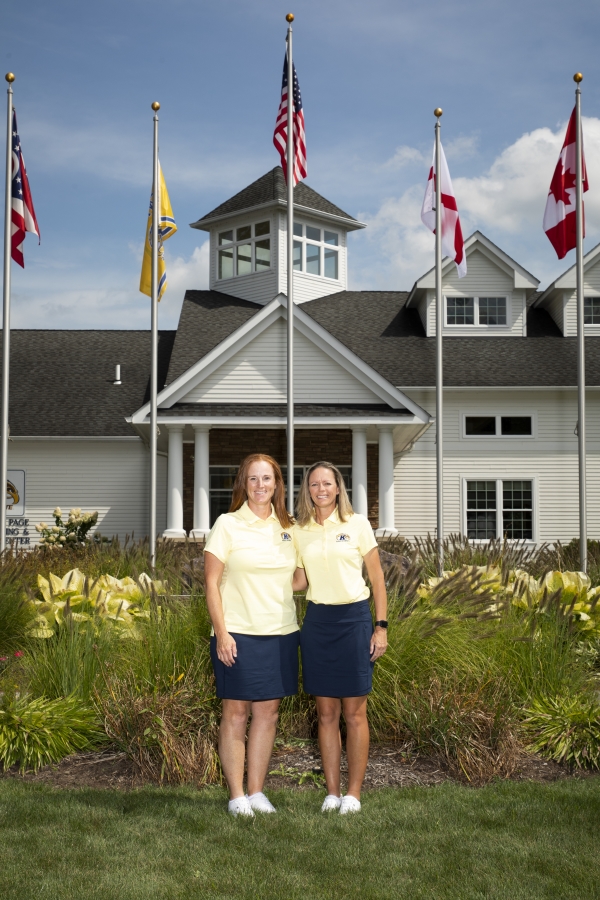 So while the process was hectic, the transition was quick and the winning Kent State women’s golf is noted for not only continued immediately, it rose another notch.

“Going back to July, when everything was happening, and getting hired, I was aware of Kent State, in general,’’ Strom said. “They have been great the last three or four years, and keep continuing to rise and get better.’’

The four tournament start in the fall has served notice there may well be more to come as the Flashes begin the heart of their schedule in February, ranked No. 3 in NCAA Division I. The rest of the NCAA now recognizes what Strom discovered early in her tenure.

“This is a very special group,’’ she said of her nine-woman roster.

With the rest of the 2019-2020 campaign about to begin the golf world will certainly be keeping tabs on Kent State, meaning all past accomplishments will be in clear focus with whatever new ones Strom’s team puts together. Really, 58-1 over four events is pretty much unheard of especially for a perceived mid-major program.

Strom, a native of South Dakota, who cut her prep golf chops in Pennsylvania before getting a scholarship to play golf at Ohio State, was justifiably named Coach of the Year by Golfstat, for Kent State’s fall season efforts. It’s an honor selected by the LPGA Teaching and Club Professionals. Golfstat is the official source for NCAA men’s and women’s golf.

Now Kent State will enter the spring portion of the schedule ranked No. 3 in the nation by Golfstat, just behind Texas, the only team to defeat Kent State, barely, in the fall and No. 2 Arizona State. It took a 10-stroke comeback for the Longhorns to top Kent State the last day of the tournament by two strokes on Texas home course.

“This is a very, very special group,’’ coach Strom said of her nine-player roster which has strong players in each class from seniors on down.

Overall, Kent State has three players nationally ranked going into the spring schedule, which begins Feb. 2 at the University of Central Florida. After that the Flashes will play what coach Strom considers the toughest match of the season at the Northrop Grumman Regional Challenge in Palos Verdes, Cal.

“That will be like at field at an NCAA Tournament Regional,’’ she said.

Indeed it will. No. 1 Texas, No. 2 Arizona State, No. 4 Wake Forest and No. 5 USC will join No.3 Kent State in a 16-team field that, overall, has 10 teams going into the spring campaign ranked among Golfstats Top 25.

How can no-doubt underdog Kent State stand up against such company? One reason is that potent roster, which includes three nationally-ranked players in No. 7 senior Pimnipa Panthong, No. 15 senior Karoline Stormo and No. 29 freshman Caley McGinty. Texas is the only other program in the country with three individuals ranked in the Top 30 nationally.

When asked if that second outing of the spring season was too early for her team to have such a challenge, Strom had a strong reply. “They’re ready,’’ she said. “The girls are ready. They’re hungry to compete. They love teeing it up when it means something.”

“Golf is such a global game theses days. So players who want to play on the LPGA Tour have learned they can get a lot of experience through college golf and preparing for that next step for them. That’s what we’re trying to do here. If a kid wants to continue on and play at the next level, we want to make sure they’re getting the best experience possible, and they’re ready to take the next step.”

When asked just what type of team she has, Strom says there is a mix of everything with the overall direction of the sport going to more and more power.

“Pim and Karoline really hit it,’’ the coach said. “Both hit it pretty far. Caley is not quite a long as those two. The game itself, is going to where length is a key factor, so that’s something you’re always recruiting for.

“But more than anything, as a team, they’re super sharp. Nothing really rattles them. They’re ready for any situation. They don’t get ahead of themselves and seem to finish strong. They can close the deal at the end of the tournament. And that’s what we’re looking for come spring as we envision ourselves having a chance to win a national championship.”