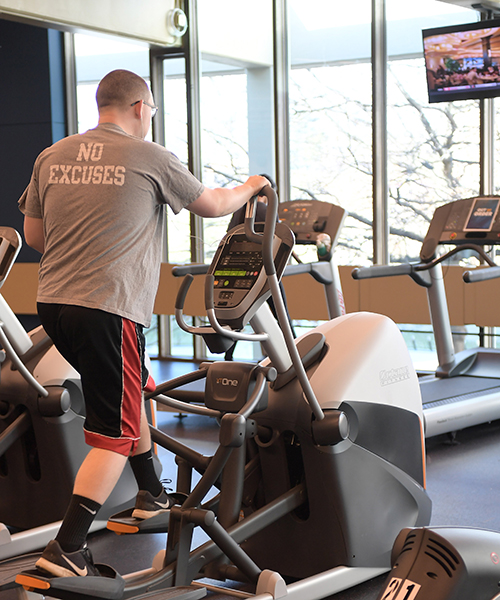 “We have really been starting to get a lot of support behind health and wellness from the university, especially under the new president,” said Steven Langdon, marketing coordinator for Kent State’s Department of Recreational Services. “The new Kent State of Wellness initiative was almost like the driving force behind this. We knew we had the support of the university.”

Langdon said Tri-Rec is centrally located, which adds value for students who live on campus. Kent State’s campus-resident fitness center project is comparable to that of other, similarly sized universities, which also have multiple facilities throughout campus.

“It’s about 100 yards from my dorm, whereas the other one is about half a mile,” said Eric Rohrabaugh, junior exercise science major. “So it’s more convenient to get a workout in here before class.”

Kent State alumnus and former recreational services employee Bryan Knapp is now with G&G Fitness, the company that supplied all of the equipment for Tri-Rec. He and Ben Cope, assistant director of fitness and wellness at Kent State’s Department of Recreational Services, shared the vision for the Tri-Rec facility.

“We had a personal connection with Bryan, and because of that, we were really proud to move forward with him and confident that he would provide the best equipment for us,” Langdon said.

Langdon hopes that students will be more motivated to start an exercise routine now that there is a gym closer to the residence halls. The size of the gym is also more welcoming to beginners, who might be intimidated by the main recreation center.

“At home, I have a really tiny gym, so this is more me,” said Erica Noble, freshman nursing major. “I feel more comfortable here than at the huge rec.”

Like a hotel gym, there are no locker rooms or showers at Tri-Rec, which Langdon said gives students a more relaxed, homey feel.

“It’s built to be an in-and-out workout,” Langdon said. “It’s prime to throw in a load of laundry and get your workout done in that same time. And, then, right downstairs is Rosie’s Diner and Market. You could do everything all in one shot.”

LEARN MORE ABOUT the TRI-REC