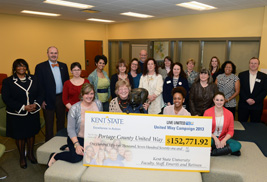 This year’s campaign, chaired by Kent State Vice President for University Relations Iris Harvey, focused on increasing the number of Kent State employees who contributed to United Way. At the campaign’s conclusion, participation increased by 112 donors over last year.

“We achieved a number of impressive milestones this year,” Harvey says. “Three of our 11 colleges, as well as five departments, divisions and offices on campus, achieved or surpassed the goal of tripling the number of employees who gave in 2013 versus their 2012 results.”

Participation results at or above goal were:

The ceremonial check is now displayed in the window of the United Way of Portage County’s office in Ravenna. The window also includes a thank-you message to Kent State for its contribution to this year’s campaign.

“Thank you for contributing to this important cause,” Harvey says. “Your support is essential to the success of our campaign.”