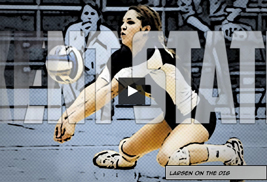 for his work on the 2011 Kent State women's volleyball introduction video.

The Telly Awards honor creative and innovative video production work from all over the country. Companies like FOX Sports Net, Nickelodeon and Walt Disney Parks and Resorts submit their work for review. Less than 10 percent of entries are awarded with a Silver Telly, the Telly Awards’ highest honor.

“It feels really good to get a Telly Award because it makes the work we put into the video worthwhile,” says Hurguy. “This is the first Silver Telly I’ve been a part of.”

The video resembles a comic book and depicts the team getting ready for a game. This is the first introduction video TeleProductions has produced for the volleyball team. It was played at the beginning of all home volleyball games this past season.

With the help of graphic assistant Brian Recktenwald, Hurguy combined green screen footage, graphics and a comic book theme to create the video. Recktenwald, a senior managerial marketing major, put the images together while Hurguy acted as art director.

"With Brian on board, the quality of all of the sports teams’ intro videos this past year has been outstanding,” Hurguy says.

The green screen portion of the video was done well in advance of the volleyball season.

“With the green screen footage, you have to come up with a shot list that fits the theme,” Hurguy adds. “It’s important to think about what you want the final product to look like so you can make sure there are enough shots and angles to really add to the video.”

To see the award-winning video, visit KSUtube. You can view more of the graphic team's work on the TeleProductions’ website.